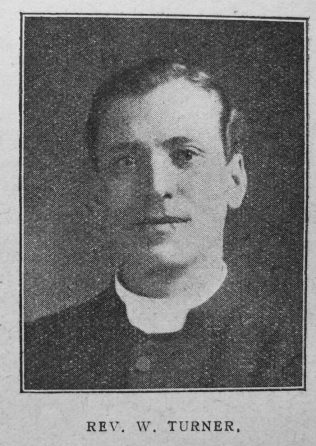 Transcription of sketch in the Christian messenger by J.G. Bowran

It is the glory of our Church that in our ministry there is room and welcome for all types of men. We encourage men to develop themselves on their own distinctive lines.
“The gift which He on one bestows
We all delight to prove.”

We had the joy of proving Mr. Turner’s gifts some months ago at Torquay, and greatly profited by the sermons we heard him preach. Without doubt he is one of our best and ablest preachers. All the sermons were about Jesus, and revealed a quite unusual insight into the mind and message of the Master. We are glad to append here some particulars of our friend’s life.

He was 88, in what was then the Bloxwich and Cannock Circuit, in the year 1879, but when he was two years of age he removed with his parents to the neighbouring village of Cheslyn Hay, where he spent the years of his boyhood. When quite an infant he was taken by his mother to the Primitive Methodist Sunday School, and his earliest and most vivid recollections are of his father’s prayers before he went to business in the early morning: “Lord, bless my boy!” There can be no surprise that out of such a home a spiritually minded youth should emerge.

Our friend pays tribute to two personal influences. The first was that of Mr. T.J. Stewart Hooson, B.A., the governor of Bourne College. He was a pupil in this famous school, and recalls with great pleasure and gratitude the guidance and inspiration he received from Mr. Hooson. The other formative influence came from Mr. Thomas Weetman, of Cheslyn Hay, a most gifted local preacher, a man of wide theological and philosophical knowledge, and of quite extra-ordinary ability. It was under his immediate guidance that he studied for the ministry. We rejoice to speak of these personal influences. There are always others behind men who come to the front. Just as Paul was discovered by Barnabas, so men to-day are being influenced and thrust forward into the good work by others.

After two years in Hartley College, under the principalship of the Rev. G. Parkin, B.D., he began his ministry in the Newton and Hyde Circuit, having as his Superintendents, the Revs. E. S. Cole and the late W.C. Dando. He has since laboured at Nantwich, Quinton, Darlaston and Torquay. He is now stationed at Knighton. He married Florence, the youngest daughter of the late Rev. William Wright. She is heart and soul in the interest of the Churches, and full of gifts in every way. We are quite certain that he will come to increasing recognition.

William was baptised on 17 February 1878 at Cannock. His parents were James, a coal miner, and Sarah Jane. Sarah died in late 1879.

William married Florence Caroline Wright (b1881) in the summer of 1907 in the Nantwich Registration District. Census returns identify one child.

I have not been able to identify a death record for William or Florence.