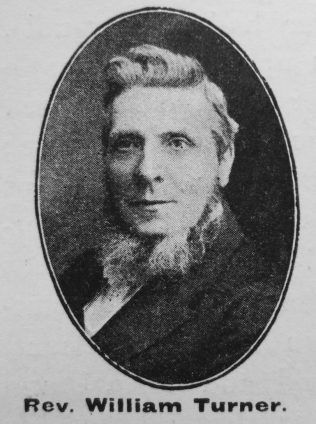 On Wednesday, 25th March, 1903, by the death of the Rev. William Turner, there passed into the higher service one of the most faithful and successful ministers of our church. He was born at Dudley on March 5th, 1843. Shortly after his birth his parents removed to Old Hill. He was the son of William and Mary Turner, who for many years were honoured members of our Church.

Through the good impressions received in the home and the Sabbath School, he was early led to Christ. By diligent self-culture he sought to equip himself for service in the Church. His circuit, discerning his native gifts and capacity for higher usefulness, raised him to the Local Preachers’ Plan, and soon after, at the age of eighteen years, he was called into the ministry of Nottingham II. Circuit. After labouring successfully on Nottingham, Grantham and Horncastle Circuits, his voice failed, and in 1865, he was compelled to relinquish the much-loved work. At the Conference of 1871 he was again received into the ministry, and from that time he has laboured with untiring zeal for the salvation of men and the glory of God. The circuits which had the joy of his ministry are as follow – Ludlow, Stafford (three times), Sandbach, Talk o’ the Hill, Crewe, Bloxwich and Cannock, Silverdale, Holloway and Tottenham. His ministry was one of growing power and success. On every circuit he had the joy of witnessing many conversions, and never had the pain of reporting a decrease. He was a man of transparent sincerity, deep convictions unbending where questions of conscience were at stake, yet gentle, loving, sympathetic as a child.

He was a man of God. He dwelt in the secret place of the Most High, keeping holy fire burning in his own soul. Prayer to him was a constant delight. He struggled hard to attain his own high ideals of what a Christian minister ought to be. All his powers of mind and heart he brought to bear on the efficient preaching of the Gospel.He knew his Bible, and was specially fond of Puritan and Methodist theology and biography. In his preaching there was the confident note. He believed and therefore he spoke. For earnest appeals, straight home-thrusts, burning words on the great realities of sin and salvation, he was rarely equalled. He was in tremendous earnest. He spoke as a dying man to dying men. His word roused the conscience and stirred the soul. Unsparingly he denounced evil in all its forms. He never shunned to declare the whole counsel of God. He urged on Christian people the possibility and the blessedness of the sanctified life. There was constant freshness and richness in his sermons. For all his congregations he had a message from God. In his services there was unction. His word throbbed with emotion and went straight to the heart, and so multitudes listened to his preaching with intense delight and great spiritual profit. He had a marvellous gift in prayer. To hear the outpouring of his soul before God at his own family altar, in the sick room, or the sanctuary, was a spiritual treat never to be forgotten. Much of his success was due to helpful home influences. His was a model Christian home. For twenty-eight years he had one of the best of wives – one who was a constant stimulus and help to him in his private and public life. He had also much joy in his children, who promise well for positions of usefulness. The beauty and sweetness of his character were, if possible, better seen in his own home. He was the man of God at the fireside as well as in the pulpit. While giving the splrltual interests of his circuits the supreme place, he attended diligently and successfully to their business concerns he had a fair share of chapel building responsibilities. New schools at Stafford, new chapels at Coton Clanford, Armitage, Cannock and Woodbery are among the erections with which his name will ever be honourably associated. He was a prolific lecturer. One of his lectures on “John Rogers” has been published, well reviewed, and widely circulated. He removed to Tottenham in July, 1902, full of enthusiasm and hope, expecting to do there a great work for God. Alas, the end was nearer than we thought. He contracted a severe cold. Muscular rheumatism followed and consequent on this, heart failure; and on March 25th, 1903, he peacefully fell asleep in Jesus. Shortly before the end he told his loved ones he was going home; to the eldest son, overcome with sorrow, he said, “Don’t weep. I am only going home, and I shall be near to you and watching over you.” His last words were, “I shall be satisfied when I awake in Thy likeness.” The funeral service was conducted in Tottenham Chapel on Monday, March 30th. Many London ministers gathered to pay respect to the deceased, among whom were Revs. R. Bryant, and R.R. Connell, representing the General and District Committees. The Rev. J. Johnson conducted the service, and the Rev. W.H. Taylor, of West Bromwich, gave the address. After the service the long procession wended its way to Tottenham Cemetery. The Rev. T.J. Gladwin read the service. Mr. Haygreen, circuit steward, testified in touching words to the deep impression and lasting good accomplished by Mr. Turner’s short ministry at Tottenham, and the Rev. D.T. Maylott offered the closing prayer. Our friend being dead yet speaketh. His life and words will be an abiding inspiration. We joy in the thought of reunion when the day dawns and the shadows flee away.

William was born on 5 March 1843 at Dudley. His father, William, was a coal miner.

Before entering the ministry, William worked as a blacksmith.