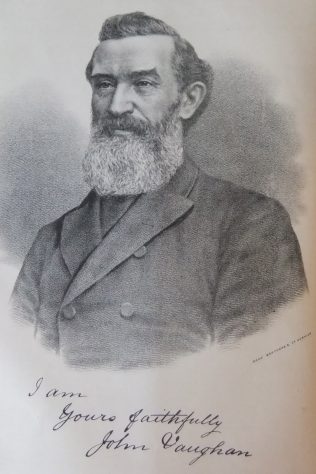 John was born on 31 May 1831 at Wells, Somerset to parents Joseph and Fanny. Joseph worked the land.

John’s parents attended the Church of England. He was the eldest of ten children and had to go to work when very young. He had little by way of educational opportunities.

John worked in paper mills, then as a French polisher and then in service to a gentleman.

When he was 22, John went with his uncle, W Jones, to the Primitive Methodist chapel in Bath where Rev Thomas Hobson was preaching. There, John had his conversion experience. He was soon engaged in preaching in the villages around Bath and Bristol.

John’s most celebrated efforts took place in Edinburgh. In 1861 a confident young man, John Vaughan, just out of probation, was sent to do something about the situation on Edinburgh. A few days later a house fell down in the High Street and on the next Sunday he preached beside it in gaslight. This made his name and later he was asked to preach at a service in the Free Church Assembly Hall. He was invited to exchange pulpits with ministers of other denominations.

In articles for the Primitive Methodist Magazine from his arrival in 1861 when there were 58 members meeting in a rented hall, he reported emotional conversions, tears over lost conditions, success in setting up weeknight meetings and increases in membership. The climax of these reports came in 1866 with Edinburgh’s newly-built chapel, schoolroom and minister’s house in Victoria Terrace, ‘one of the best situations in the city. Italian style of architecture, reclining paneled back benches . . . platform, two galleries, neat vestry fitted up for a study … Organ … powerful 2 star gas lights . . . windows best crown glass, with ruby borders and a white flower on front windows.’ As preachers at the Mission Anniversary, he got the great Thomas Guthrie, Moderator of the FC General Assembly, followed by ministers of the Independent, Baptist, and Free Church. ‘This,’ wrote Vaughan, was ‘considered by our people to be the best missionary anniversary ever held in this city. We give God the glory’.

John’s obituary records that he was strong-willed, tenacious, untiring and energetic. His mind was of a logical practical cast, not given to much speculation. He had excellent analytic faculty, and was surprisingly neat in his homiletic work, as, indeed in all his habits and his personal appearance. He had a terse nervous style of speech and writing.

J Petty, The History of the Primitive Methodist Connexion, 1880, p 622