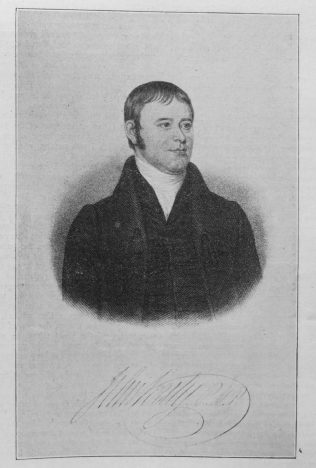 JOHN VERITY was known by hundreds who read the Primitive Methodist large Magazine; and as no account of him has appeared in its pages, the following short sketch, with the verses,* which were composed by him a few weeks before his death, will be acceptable to many. Of the period of his conversion, the way in which he was led into the itinerancy, and the peculiar phases of his ministerial career, we have not even a moderate knowledge; but by many who had the privilege of hearing him from time to time, they will, no doubt, be vividly recollected; for as he was not an ordinary man, his memory cannot but be deeply engraven on many hearts.

His imagination was fruitful, his voice powerful and full of music, his person and address pleasing, his aim clear, and his appeals pointed; and, hence, he was popular as a preacher. Nor was this all: his pulpit efforts were edifying, convincing, and saving; so that many will have cause to rejoice eternally that ever they heard him. The Bible was his main book; its figures were closely studied by him, highly prized, tenaciously recollected, and liberally used; and as his memory was well stored with moral and religious anecdotes, which he easily and liberally used in illustrating any proposition, he was interesting and instructive as a preacher and as a fire-side friend. Though possessed of much wit and extemporaneous talking talent, he did not rest on these to the neglect of close study and earnest prayer when called to stand as a minister of Christ between the living and the dead; but bestowed much pains in preparing his discourses, many of which are left in manuscript in an almost finished state.

Barnsley circuit was the last wherein he travelled: here he was struck down by paralysis, and rendered unable to preach except occasionally. To be thus suddenly deprived of the talent which he had publicly, usefully, and pleasurably employed in the cause of Christ for many years, was trying; but remembering by whom the chastisement was inflicted, he kissed the rod, and blessed the Hand that used it. His patience and resignation were exemplary: “Not my will,” said he, “but the will of the Lord be done.” In this state of mind he looked for the coming of Jesus, though the event was not expected so early as it took place. Happy our brother! for he was ready. “Be ye also ready, for in such an hour as ye think not, the Son of man cometh.” In the early part of July 6th, 1849, brother Verity was apparently in better health than usual; but ere the day ended he was in the spirit-world,— where

“ Sickness, sorrow, pain, and death,
Are felt and fear’d no more.”

His remains were followed by a large concourse of mourners to the new cemetery at Leicester; and a neat stone, purchased with the profits derived from the sale of the accompanying verses, tell of his resting-place till the resurrection morn. His aged partner still lives to mourn her loss, but soon she expects to meet him in heaven.

TENANT of my house of clay,
Destin’d for a brighter day,
Quit thy tent, and haste away :
Heavenly mansions wait thee!

To thy nobler seat above,
Purchased by redeeming love,
Why so backward to remove?
Jesus waits thy coming!

From a gloomy vale like this,
Through the emerald gates of bliss,
To remain where Jesus is ;
Saints will greet thee welcome!

Let thy wasting body die;
Calmly close thy faded eye:
Though in dust thy frame must lie,
Thou wilt mount to glory!

Jesus hath illumed the gloom,
Left a lamp within the tomb,
Till the last and general doom—
The resurrection morning !

Then with rapture and surprise,
Glorious thou wilt see it rise:
‘Mid the splendour of the skies,
Thou ‘It put it on for ever.

Then around the throne to shine,
Soul and body both divine,
And with saints and angels join
To praise the Lamb for ever!

To all my friends, adieu, adieu !
That this may be the case with you,
Always keep the end in view,
And we shall meet in glory!

The 1841 census return records John aged 50 as a preacher at Huddersfield, Yorkshire.