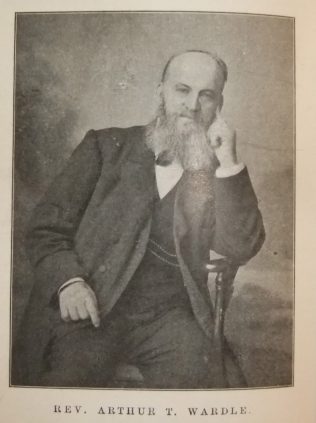 Arthur was barely ten years old when he went to work at the coal mine, the colliery belonging to a firm that his father served for over seventy years. His working hours at the mine were 3.30 am to 6pm. Arthur became a member of the church at the age of fourteen and soon afterward he began to speak in public as a series of out-door meetings in the village. The Quarterly meeting appointed Rev Thomas Greenfield to hear the boy preach and ‘examine him’ for the plan. At the age of eighteen, Arthur was asked to become a minister, but his parents refused their consent. When he became of age, the circuit recommended him and he spent a year at Elmfield College before entering circuit ministry.

During his ministry Arthur was involved in erecting twenty-one chapels, schoolrooms and manses. He was involved in renovating a further thirty-seven chapels. His obituary records that in his forty-six year ministry he received on average one person per week into the Church.

Arthur was a truly spiritual preacher. His sermons were full of true religion, and behind them a deeply spiritual nature shone through.

Arthur was district secretary for ten years and served for nearly twenty years on the General Examining Committee.

Arthur married Rebecca Elizabeth Frankling (1846-1940) in the summer of 1891 at Wellingborough, Northamptonshire.