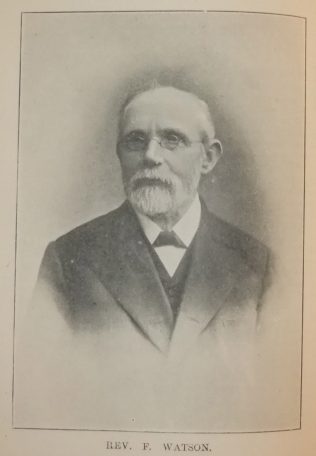 Featherstone was born on 24 October 1844 at Burtreeford, nr Wearhead, Co Durham. His maternal grandfather was one of the earliest Primitive Methodists in the Dale and a trustee of the Wearhead Chapel built in 1825. His father died when Featherstone was aged four. In consequence of this loss, his school days ended at the age of nine.

Featherstone was converted at the age of eleven. This was a new beginning, bringing with it a thirst for knowledge and self-improvement. At the age of seventeen he became a local preacher and within three years was recommended and accepted for the ministry. He had hoped to spend a year at Elmfield College but was appointed direct to circuit work.

As a preacher, his sermons were instructive, helpful, and surprisingly models of careful preparation: logical, luminous, and living they were indeed words of light and life.

As a pastor, Featherstone was ever welcome in the homes of his people, and was no stranger there, sharing in their sorrows and joys, and understanding well hoe to order his speech to comfort those who mourned.

Featherstone died on 5 May 1904 at Stokesley, Yorkshire.