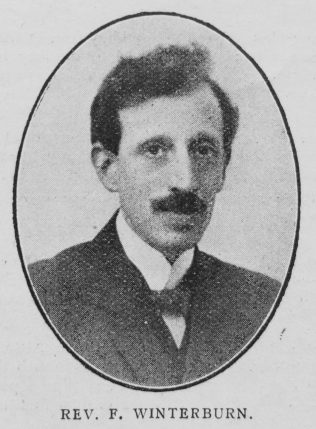 FRED WINTERBURN: born at Methley, Leeds, in 1875. He had a good heritage of a Christian home, and thus encountered his Lord in early life. He was accepted as a candidate for the Primitive Methodist Ministry, and after being trained at Hartley College, he was appointed in 1897 to his first circuit, Barnard Castle, as assistant to the President of the Conference. Thus began an active ministry of thirty-seven years which was maintained throughout at a high standard. He travelled in the following circuits: Selby, Northampton, Middlesbrough, Long Eaton, Hull, Sunderland, Wakefield, and Huddersfield. Here he retired in 1934, but for ten years he continued to exercise an influential, if less active, ministry of preaching, of pastoral visitation, and gracious hospitality in the home. He was a shrewd, cautious Yorkshireman. His opinions, slowly formed, were held as firm convictions. He was an omnivorous, reflective reader, with a particular interest in philosophy. He had distinct musical and artistic gifts, and also loved his garden. But above all he was a Methodist minister, a thoughtful and studious preacher, a sympathetic pastor, and an able administrator. His last years were spent at Cambridge, where he gave unremitting devotion to his invalid wife. He died very suddenly on 12 January 1960, in the eighty-fifth year of his age and the sixty-third of his ministry.