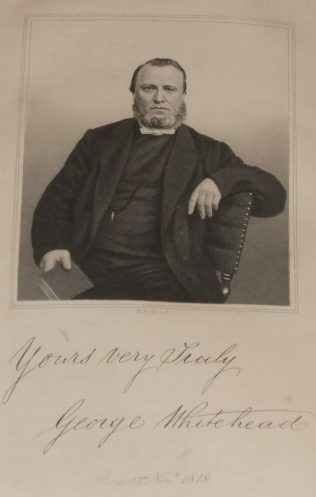 George was born on 13 November 1818 at Haxey, Lincolnshire to parents Francis Whitehead and Mary Cockin. He was baptised on 13 December 1818 at Haxey. He was converted at the age of 15 under the ministry of George Lamb. George served as a local preacher for some time and was then recommended by the Epworth Branch of the Scotter circuit for itinerant ministry.

For 39 years he fulfilled his course on 21 stations with acceptance and a measure of success. Purity, straightforwardness, honesty, conscientiousness were in him marked characteristics.

As a preacher he was plain, masculine, and deliberate; as a man of business excelling many, being especially adapted for legal matters, distinguishing himself as an authority on Connexional law.