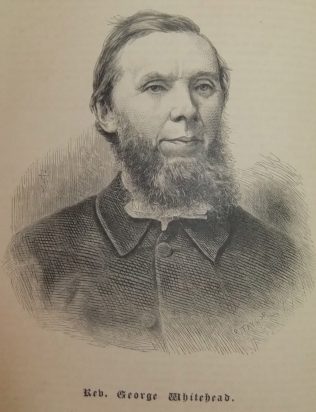 George was born on 31 October 1824 at Kearby, nr Kirkby Overblow, Yorkshire, the fourth son of William and Anne. William was a farmer/builder who died when George was 10.

On William’s death the farm was given up and the family moved to Spofforth, near Knareborough. George was apprenticed to his uncle, Mr Tate a provision merchant. In 1851, George is working as an assistant draper/grocer for his brother in law. His mother, Anne, is described as a wheelwright’s widow.

George attended a Wesleyan chapel when he was young. His mother’s family had Wesleyan connections back to the time of John Wesley. He became a local preacher in the Knaresborough Wesleyan circuit, a circuit with 31 preaching places. On average, George preached every other Sunday. The period 1849-1853 was a period of unrest in the Wesleyan movement due to the Reform movement. George and several others joined the Primitive Methodists.

George filled in on supply for a sick minister in the Wakefield circuit. He was pledged at the 1855 conference by the Pickering circuit.

George’s time in Guisborough was particularly fruitful. In three years, membership increased from 163 to 283.

George’s obituary records that in reviewing the character of Mr Whitehead as a minister, he impresses as having all the qualities, positive and negative required of a New Testament bishop: “Vigilent, sober, of good behaviour, given to hospitality, apt to teach. Not given to much wine, no smoker, not greedy of filthy lucre; but patient, not a brawler, not covetous.”

George married Lydia Jackson (1832-1896) in the spring of 1859 at Helmsley, Yorkshire. Census returns identify one child.