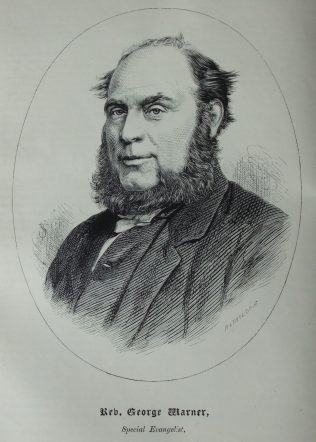 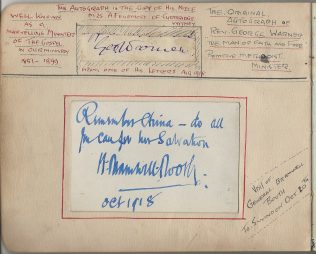 George was converted in 1848 at a Wesleyan Chapel near Worcester. When he moved back home, he joined the Primitive Methodists at Napton. He was soon on the plan and called to ministry by the Banbury circuit in 1851.

A hint of George’s style comes through the description of his work at Malmesbury in Kendall; ‘…as late as 1854, Malmesbury at last yielded to the vigorousassaults of George Warner, and in 1858 was made a circuit.’

George was the first entirely connexionally supported evangelist, a benefactor named T. Jones gave £100 to inaugurate his career as a holiness evangelist. George had a vision to unite the call to salvation with the challenge of holiness. Speaking of the relationship of faith to full salvation George said, ‘It is like a man under a shower-bath. He pulls the chain and down comes the water‘.

Thomas Waugh was typical in denouncing questionable amusements such as gambling anddancing. A spirit-filled church, as he put it, is ‘world-emptied’. The principle of avoiding popular forms of entertainment was widespread in Evangelicalism as a whole, but holiness zealots could apply it particularly sternly. Thus George Warner, the leading holiness preacher among the Primitive Methodists, always regarded simple musical services as dangerous.

Perhaps the most challenging of the campaigns against worldliness was the one against smoking. The King’s Highway carried in 1882 an article from an American counterpart urging the abandonment of tobacco and Warner frequently denounced its use. The tobacco habit and appetite were alike inconsistent with holiness, he insisted; he himself had renounced the habit and God had destroyed the appetite. In several of Warner’s missions smokers abandoned their pipes, one local preacher giving it up during the singing of ‘My all is on the altar’.

Sir Henry Thompson performed surgery on George and remarked on the state of his knees. George told him that night after night on his knees in prayer and reading the scriptures had produced a particularly painful problem.

After he superannuated in 1891, George continued to work as a special agent at Nottingham, Bristol, Barnoldswick and Settle, where he died.

Rev I E Page writes in his obituary; ‘He was a typical Primitive Methodist, a fervid, happy saint with glory in his soul. He had a passion for saving men, and for leading believers into Christ’s full salvation, and God used him to save many – ‘Gypsy’ Smith (in1876) among others.’