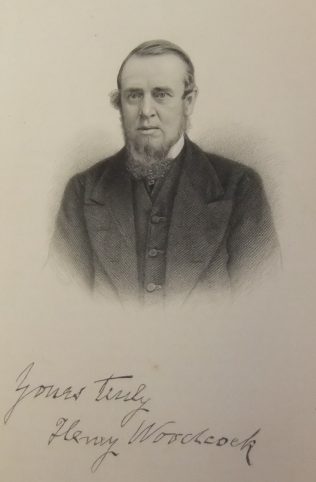 Henry was born on 30 April 1829 at Bridlington, Yorkshire to parents William Woodcock and Mary Coupland. He was baptised on 1 January 1830 at Zion Independent Chapel, Bridlington.

As a child he had two narrow escapes from death. He escaped drowning when he was caught up by an angry wave and carried about 200 yards out to sea. Fortunately the returning wave brought him back to the beach. He also fell from a hayloft, experiencing serious injuries, in particular his right arm was paralysed and he needed someone to write for him.

As a child he was once driving a flock of sheep to Filey. He lost control of the flock and a passer-by lent a hand to gather the sheep. When Henry enquired as to the name of his helper, it was William Garner, who later became a colleague at Hull and Driffield.

Henry left school at the age of 9 and was apprenticed to a printer, Mr W Dalby. In 1843, Henry became a tailors apprentice. He was converted at the age of 14 at Bridlington chapel and soon became an exhorter. His preaching skills rapidly developed and he was invited to become itinerant in October 1849, before having completed his time on trial on the plan, by the Louth circuit to supply in place of John Symons who had died suddenly.

Ritson writes: ‘The Rev. Henry Woodcock brought his young bride to a house consisting of two rooms, which had been used as vestries, situated behind the chapel, and approached by a dark passage. The solitary door opened into a dark and dismal yard used for all purposes by four families, in which clothes were hung to dry on four days a week, except when two families washed on the same day. To make matters worse, the yard was a thoroughfare. Stories without end, of a similar kind, might be gathered from all parts of the connexion. If the ministers were saints, their wives must have been angels.’

Henry’s obituary records that he loved to preach. It was the supreme passion of his life, and his work never lost its halo. He felt a holy, exulting pride in his vocation and no familiarity ever robbed him of the wonder of his great commission.

The gipsies; being a brief account of their history, origin, capabilities, manners and customs, with suggestions for the reformation and conversion of the English gipsies. (1865)

Wonders of grace; or, The influence of the Holy Spirit manifested in upwards of three hundred and fifty remarkable conversions (1879)

The hero of the Humber; or, The history of John Ellerthorpe (1880)

Piety among the Peasantry:  Being sketches of Primitive Methodism in the Yorkshire Wolds (1889)

The romance of reality: Being sketches of homespun heroes and heroines and the part they played in the making of Primitive Methodism (1910)

A pamphlet for the people: or reasons why a Primitive Methodist offers passive resistance to the Education Act of 1902.

The two orphans and other tales.