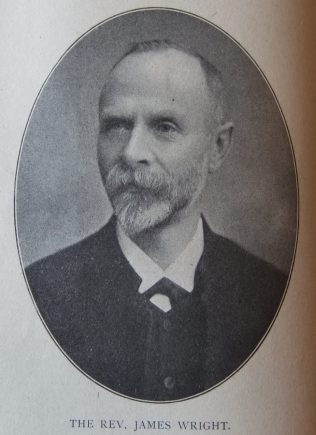 James was born on 14 December 1855 at Glazebury, nr Leigh, Lancashire, to parents James and Maria. In 1871, James, senior, was an overlooker in a cotton mill.

James yielded himself to Christ when thirteen years old. He began to preach on his seventeenth birthday and soon afterwards was requested to prepare himself for the ministry. When at length he was able to respond, and having successfully passed his examinations, James found that the Missionary Committee was urgently in need of men to serve the Church in Queensland. James abandoned the privileges of a college course and became a colonial missionary.

James’ circuit life was a powerful testimony to the value of the pastoral ministry, for while he was always an earnest, forceful and effective preacher, his chief work was done in the homes of the people. In that respect, James was utterly tireless, and the results were visible in the high tone and increasing strength of the churches under his care.

James was president of the Queensland Synod in 1892, and in the same year represented the colony in the English Conference. On return to England, his ministry was mainly in east Lancashire.

After Ellen died, James was supported in his ministry by his niece, Annie Maria Charlotte Wright (1883-1963).