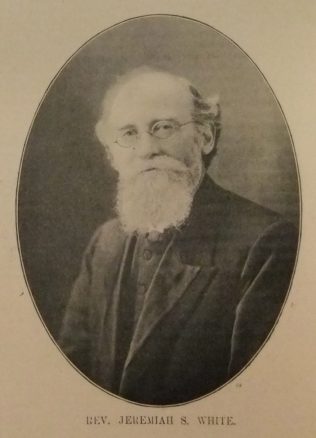 Jeremiah was born in 1849 at Cockermouth to parents John and Jane. His father, a stone mason from Scotland, died when Jeremiah was two years old. John had been superintendent of the Sunday School. Jane supported the family by working as a grocer in Carlisle. His brother, William James, was also a PM Minister, but died after only three years ‘travelling’.

After a good schooling Jeremiah commenced his career as a journalist on the staff of the Whitehaven News. Jeremiah was converted as a youth, joined the Church and began to preach. The death of his brother was a trigger for Jeremiah to take up a call to ministry.

As a preacher Jeremiah was instructional rather than inspirational. He would seize the principle embodied in a text and expound it with such felicity of expression and wealth of illustration that his congregation would not readily forget it – if they had the necessary mental trouble to follow him.

In 1914, Jeremiah was Secretary of Conference.

In 1915 Jeremiah took up the position of almoner to Sir W.P. Hartley.

Among his many interests in reading and philosophy, Jeremiah also acquired unusual power as a hypnotist.