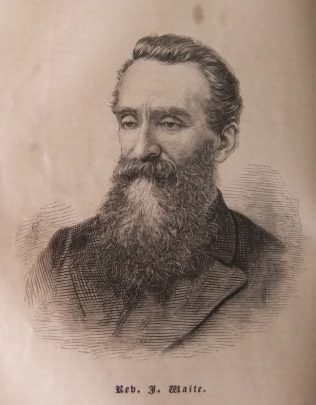 John became a local preacher quite young and was recommended for ministry aged 20 by Rev. Charles Smith.

His obituary records that John was a hard working, industrious minister, and made the most of his gifts and opportunities.

He was never a strong man physically and suffered attacks of asthma. Nevertheless he rarely missed an appointment. He very carefully prepared his sermons and was attentive to the business of his station.

As a man, Mr Waite was kindly in his disposition, though at times he was stern and could be very severe when denouncing duplicity or cant. Manly and outspoken himself, he hated duplicity in others and denounced it in no measured language. His outspokenness might sometimes give offence, but more commonly it won the confidence of the people and procured their respect.

John died on 8 August 1886 at Stanley, Co Durham. Following his death, John’s widow and family moved to Toronto, Canada to live with his eldest son.