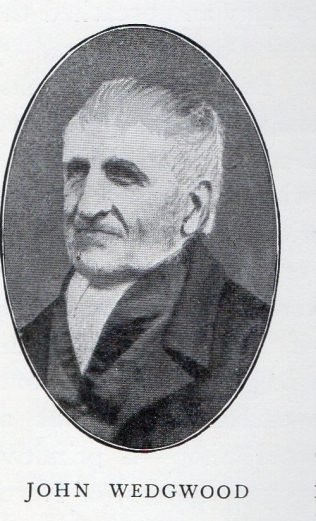 Like William Clowes, John Wedgwood was a potter. He was a member of the Wedgwood pottery family and therefore a distant relative of Clowes. (John’s grandfather, Thomas Wedgwood (1716-1773) was an older brother of Josiah Wedgwood (1730-1795).) His father, William, is known to have owned land rich in minerals used in the pottery business, but, although John was the eldest child, he did not take any interest in the on-going management of the family estate.

Following his conversion in 1809, he soon became a preacher, and a well-known figure at Camp Meetings. Sarah Kirkland heard him preach in 1812 at her home in Mercaston, Derbyshire. One story relates that when journeying to a Camp Meeting with William Clowes, John’s zeal for preaching to all and sundry on the road consumed so much time that night overtook the two travellers and they got lost on a common, narrowly missed falling over precipice or into bog, and were pursued by robbers.

John Wedgwood visited Grantham in August 1817 and started to preach in the open air at the Cross. He was quickly apprehended by a constable and jailed, becoming the first PM, but not the last, to go to jail on account of his faith. A Mr Lockwood resolved to follow his example the next day and was also apprehended and brought before the magistrates. He persuaded them to bail him on his own recognisance to appear at the Quarter Sessions and John eventually did the same. It is reported that he initially refused bail, until he was urgently needed at the approaching Camp Meeting at Buckminster. When the case was heard they were acquitted. A Sir William Manners also took the side of the missionaries and ordered a stone pulpit to be erected on his own ground near the market cross. His protection of the missionaries caused the prosecuting magistrates to cease opposing open air preaching.

In 1818 we find John participating in a mission to Leicestershire, which also involved John Benton and William Clowes..

He was a key figure in laying the foundations of many societies in Staffordshire and Cheshire. He is particularly remembered for his mission to Cheshire in 1819 where he was instrumental in the conversion of Thomas Bateman amongst many others. However, as a breaker of new ground, he left the work of organising societies to others.

Until 1829, when he entered the ministry, he laboured more or less as a free-lance evangelist. It is suggested that a change in his circumstances caused him to become recognised as a travelling preacher.

Barber relates that John was a man of ascetic habits, eccentric and independent, he was also fearless, devoted and toiled incessantly.

John married Hannah Hand (1815-1870) on 20 February 1840 and lived for 17 years at Boylestone, Derbyshire. In 1857, he moved to Crewe, which had improved transport links, for he continued to travel to preach. He died on 20 March 1869 and was buried in the grounds of the PM Chapel at Brown Knoll. The Wedgwood Memorial Chapel in Crewe was named as a remembrance for him.

Thomas Bateman, Memoir of the Life and Labours of Mr John Wedgwood, 1870