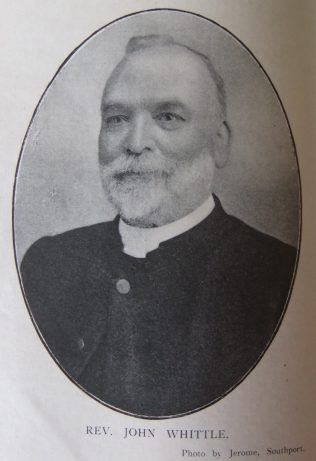 John was born in 1853 at Warrington, Lancashire to parents Thomas and Mary. Thomas was a cotton spinner and was a local preacher and class leader for thirty years. The family moved to Bolton when John was a few months old. He was converted aged eleven and went of the plan when fifteen. John’s zeal and devotion found many outlets in Christian service; in school, church, circuit, and in establishing new missions in neglected localities. His commercial prospects were bright and promising. At the time of the 1871 census, John was working as a book-keeper. It was Rev J Travis who recognised his potential for ministry and although a married man, John was pledged by the Manchester third circuit in 1876.

Most of John’s ministry took place in the Manchester District and he served as Secretary of nearly every Committee in his District.

His obituary records that as a preacher, John was a remarkable blend of prophet and evangelist. There was intellectual vigour, Culture, and careful preparation. The matter was always first, the manner second. The truth was first passed through his own soul as living experience, and then uttered with clear conviction, spiritual passion, and power.