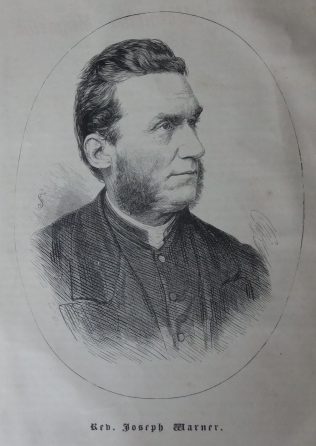 Soon after he entered his teens, Primitive Methodists visited his village and Joseph was converted. He gave himself to reading and study and developed such gifts and graces that soon he was called to labour as a local preacher.

The 1851 census records Joseph working as a farm labourer before entering the ministry.

Kendall writes; ‘Of all the names we have mentioned that of Joseph Warner will be most familiar to British Primitive Methodists, and it is a name deservedly held in high esteem by all who were privileged to know the sterling qualities of the man. For nearly sixteen years Mr. Warner did yeoman service in South Australia, and then returned to this country, where his wide experience and sober judgment of Colonial affairs were ever at the service of the Home authorities. Mr. Warner finished, as he had begun, his ministry at St. Austell in 1893, and died in 1900. One who knew him well wrote: “Had he been favoured with more robust health, a touch of brilliance and a dash of pushfulness, he would easily have reached a position in the front rank of our Connexional life.” Even as it was, despite these minus quantities, the more discerning could easily recognise in Joseph Warner “a still, strong man, . . . who could rule and dare not lie.”’

His obituary records that Joseph had rare gifts of silence, as well as considerable powers of speech. He never magnified his difficulties or trials. His consciousness of the unseen was so real and vivid that it gave him a sense of proportion, thus he was kept from thinking pin-pricks were sword thrusts. Peace prevailed in himself, and therefore all around him.