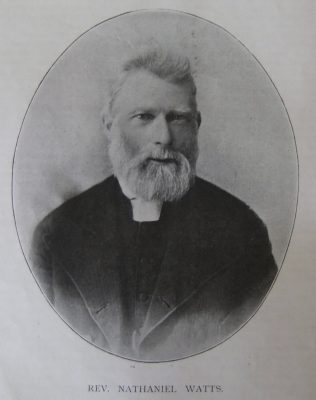 Nathaniel was born in 1839 at Kidderminster to parents William Watts and Elizabeth Cook. William was a PM Minister. His grandfather and father had been Wesleyans, but were expelled for sympathising with and helping the pioneers of Primitive Methodism at Bristol.

Nathaniel had the privilege a good education, attending Rugby Grammar School; no doubt this was a considerable sacrifice for his parents. He was converted at about 15 years old at Walkley in the Sheffield 1 circuit. He went on the plan at the age of 19 and was fully accredited within a year.

In 1861, three weeks after completing his apprenticeship, Nathaniel received a call from Rugby to work as a hired local preacher. He later moved to Newbury from where he was pledged.

Many of his circuits were extensive and laborious, but he cheerfully toiled in fields not always the most productive. Nathaniel had a natural taste for architecture and some knowledge of that profession. He prepared plans and specifications for a goodly number of chapels, schoolrooms, minister’s houses, etc. He undertook the duties of clerk of works in several erections, saving trustees and societies scores of pounds by his gratuitous services.

Nathaniel was naturally shy, diffident and his public work at first cost him much. He was not outstanding as a preacher; but as a faithful, whole-hearted, plodding pastor he had few equals. He was at his best in pastoral visiting.

He was essentially a man of peace, but never at the expense of principle, and could, where necessary, be firm and assertive.

After superannuation, Nathanial moved to Gorlaston, nr Great Yarmouth. In October 1909 he took pastoral charge of Malvern Church in the Worcester circuit. He finally moved to the Bromyard circuit in 1911 where he continued to carry out circuit preaching appointments without having any formal pastoral responsibilities.

Nathaniel died on 11 November 1914 at Fernhill the Downs, Linton, Herefordshire.