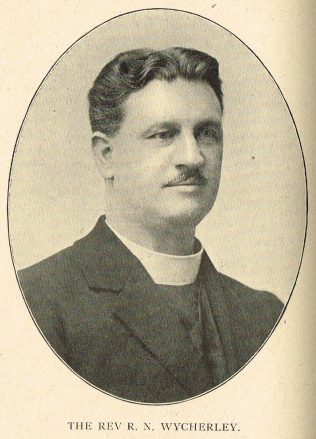 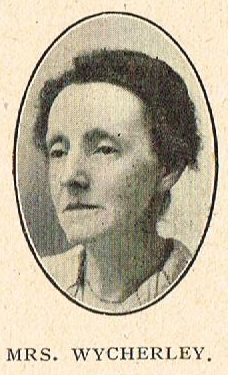 Son of a Primitive Methodist Minister

R Newman married Marion Thrift in 1896. At the time of the 1911 Census, they were living in Shobnall Street, Burton on Trent with their children: Doris aged 11; Joyce aged 6, Elizabeth aged 3 and Wesley aged 1. Marion’s mother, also Marion was resident as well.

The article about R Newman Wycherley in the Primitive Methodist Magazine 1922 states ‘Our friend has the vision combined with grasp of detail, which mark a statesman’. He was appointed Assistant Secretary of Conference in 1917.

The author of the 1922 article notes that ‘our friend has not exercised his ministry in a long succession of Circuits, but has for the most part confined himself to a few centres, where he has served extended terms and done solid and abiding work.’ This is borne out for example, in his work in Burton on Trent where he helped in the development of the Centenary Primitive Methodist Church and in West Ealing whose work he described in an article for the Primitive Methodist Magazine in 1932.

Work in the Bedford Circuit

Wycherley’s work in Bedford was over three appointments to the town. He arrived in the Bedford Circuit just as it was split into two Circuits and at the age of just 24 was appointed sole minister of the Bedford II Circuit working south of the River Great Ouse. The author of the 1922 Primitive Methodist Magazine article describes how ‘at the outset the prospect for the new Circuit was not too promising. But, soon a striking change was seen. Cauldwell Street church began a new lease of life’. Two chapels were opened during this ministry at Newtown Kempston and Bedford Road Marston Moretaine.

However, Wycherley’s second period in the Bedford II Circuit did not get off to an auspicious start. The Circuit Quarterly Meeting of 6 December decided to invite R Newman Wycherley as minister to succeed Rev William Hartwell. At the next meeting on 7 March 1918, a group felt that the vote at the December meeting to invite Rev Wycherley ‘was unsatisfactory, believing such invitation to be out of harmony with the general wish of the Circuit’ and the decision was made to ask Rev Wycherley to withdraw. It was reported to the Quarterly Meeting on 6 June that a letter had been received from Rev Wycherley declining to withdraw his acceptance of the Circuit Invitation. The following meeting in September 1918, presided over by R Newman Wycherley heard how people were unhappy about the resolution of the previous meeting and an attempt to invite a new minister for 1919 before had even arrived. They extended to Mr Wycherley ‘a most cordial welcome to the Circuit’ and protested that the actions of the previous meeting had been made ‘when the majority of the country members cannot possibly be present’.

Despite this difficult start to an appointment, it is good to note that when the time came for R Newman Wycherley to leave Bedford II, the Circuit Quarterly Meeting agreed a Resolution of Appreciation which indicates the breadth of his ministry. They resolved ‘That we place on record our sincere & grateful appreciation of the services the Rev R Newman Wycherley has rendered this Circuit during the last six year. The Circuit during this time has experienced a great & lasting revival in all the departments of its work, & at the present time is sharing great & continued prosperity. The membership has nearly doubled, debts on the various Chapels have been Liquidated, the Sunday Schools are prosperous & the C.E. Societies are doing splendid work in several of the Societies.’

Publication: The Pageantry of Methodist Union

W Leary – Directory of Primitive Methodist Ministers and their Circuits, 1990