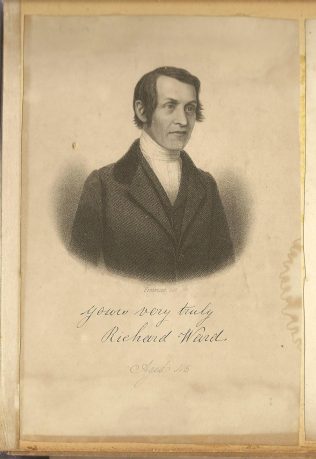 Richard was born on 31 October 1805 at Farndale, Yorkshire.

Petty records that Richard was sent to mission the notorious town of Bishop’s Castle, about twenty miles south west of Shrewsbury. On 10 August 1828, Richard and a local preacher, Thomas Evans, entered the town to find a place to preach. They were given permission to preach in the market hall. When Richard started his sermon several stones were thrown. However a great fighter was in the congregation, who wished to hear the sermon. He maintained order, with some suitable threats to the troublemakers. Several people, including the pugilist, were converted. However as the preachers left the town, they were again stoned and had to take refuge in a pasture, going over the hedge. Richard returned the following week, and again two weeks later. His efforts were rewarded as a society formed. Despite continuing persecutions, the work developed and Bishops Castle became the head of a circuit in 1832 with two travelling preachers and 135 members.

Both Petty and Kendall record that Richard was very influential in developing the work in Lichfield.

In retirement in Lichfield, Richard became a grocer.

Richard died in December 1880 at Lichfield.