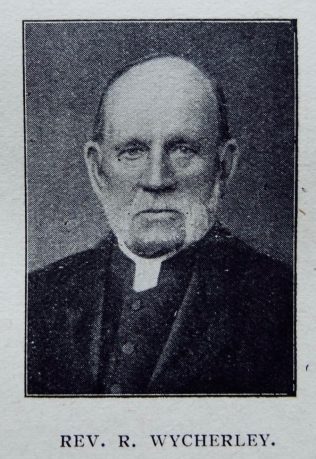 The Rev. Richard Wycherley hailed from Hadnall, Shropshire. While in his ‘teens he began to preach, and early gave promise of those gifts and graces that eventually opened his way into the full ministry. At the Conference of 1863 he was stationed, as third man, to the Wrockwardine Wood Circuit, with David Prosser (Note: probably James not David) as Superintendent and Robert Taylor as second man. So marked was his ministry that twice afterwards he returned to the circuit as Superintendent and had the great joy of seeing widespread prosperity in all the societies. From Wrockwardine Wood, Mr. Wycherley moved to Brierly Hill, thence to Newcastle-under-Lyme, and subsequently served a number of well-known circuits in the old Tunstall District, such as Church Stretton, Bishop’s Castle, Silverdale, Crewe, Wem, Oswestry, and Leek. On all these circuits he experienced considerable success, his earnest, direct, evangelistic preaching making itself felt and winning large numbers for the Christian life. During these years he took a prominent part in the Blue Ribbon movement, and at Oswestry and Leek especially had much to do with the striking advance of the Temperance Cause. Oswestry Circuit marks one of Mr. Wycherley’s most successful terms of service. He found the circuit dispirited and divided. Within a short time a new spirit took hold of the  societies; and then a great revival broke out at Oswestry and spread to many of the villages. Those who shared in the revival will never forget the marvel of the nightly services, packed congregations, a host of young people, intense enthusiasm, the impossible closing of the services – one evening the service was closed four times. Many of those who hold high position in Oswestry Church and public life attribute all their success to the glory of that revival. And who can forget West Felton, and the blacksmith’s shop that became the gate of heaven!

From the Tunstall District Mr. Wycherley moved to Wishaw, in the North British District, four of his children already having gone to reside in Paisley. At Wishaw he had a term of marked success, rebuilding the church, and largely increasing the congregations. Shieldmuir also showed great improvement. From Wishaw he returned to Newtown, in Montgomeryshire, where, owing to serious throat trouble, he was compelled to seek superannuation. At the Conference of 1893 he retired and settled down in Newtown for some years. Here he married the second time. His first wife was the daughter of John and Jane Newman, of Stafford, and sister of the Revs. Henry and George Newman. She was a very gracious lady, loved by all who knew her, and adored by her large family of sons and daughters. It is literally true to-day: “She yet speaketh.” She was cut off at the premature age of thirty-eight, while Mr. Wycherley was at Wrockwardine Wood, and sleeps in the village cemetery of Edgemond, near Newport. Mr. Wycherley’s second wife belonged to Newtown. For nearly thirty years they lived happily together, sharing in all the toil as well as the joys of service. Mrs. Wycherley survives her late husband.

All who knew Mr. Wycherley esteemed and trusted him. He made no pretence to scholarship, but he was profoundly moved by the Gospel appeal. His great joy was to preach a present, full and free salvation. He was at his best at the penitent form, pointing enquirers the way of salvation. And he had implicit faith in the value of the Class meeting. Probably when he felt class meetings a little irksome was when he travelled to a mining district and the miners timed their Sunday morning class meeting to meet at 6 a.m.! As a rule his class meetings were seasons of great refreshing. And he could sing! No Service ever lagged when he was present. Almost invariably he would start the Sunday evening prayer meeting with the hymn, “When he Cometh!” During war-time his eldest son Albert was crossing from the States to take charge of the musical arrangements of the American Y.M.C.A. work at Winchester. On Sunday evening he sat down at the instrument on the deck and began to play, “When He Cometh! ” A minister on board, who also was returning to England for war work, crossed to the player and remarked, “That takes me back years and makes me think of a gracious minister in the old country who always commenced his Sunday evening prayer meeting with that hymn.” “What was his name?” enquired the player. “A Mr. Wycherley,” was the answer. “That was my father,” proudly exclaimed the son.

For years Mr. Wycherley lived in Wakefield. Here he found many friends and a congenial home in the Market Street Society. Here – Wakefield – in the early hours of Sunday January 25th, 1925, he passed quietly into the Homeland.

The funeral took place at the Market Street Church and was largely attended by the circuit officials and District representatives. The Rev. Fred Winterburn conducted the Service and was supported by the Revs. J.W. Cotton, G. Hunt, J.H. Robertshaw, and A. Naylor. The Rev. J.W. Cotton, who had been on intimate terms of friendship with the deceased, gave a chaste and touching address, in which he paid warm tribute to the many gracious and sterling qualities of his friend. The Rev. R. Newman Wycherley and Mr. Bruce Wycherley were the mourners, the daughters remaining with the widow, who was too frail to be present. The other sons and daughters were too far away to reach home in time, several being in the States and one across the Rockies. So lived and died another saint of God. May the good Lord watch over his aged widow, and all the sons and daughters, that in the great day of His coming, the family may be reunited before the Throne!

Richard was born in 1840 at Hadnall, Shropshire, to parents William and Sarah. William worked the land.

Richard married Mary Morgan (b abt1853) in the summer of 1892 at Newtown, Montgomeryshire. Census returns identify one child.