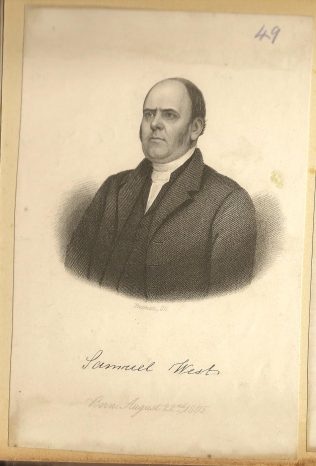 Samuel was born at Motcombe, Dorset on 22 August 1805 to parents Samuel West and Patience Broadway. He was baptised on 22 September 1805..

Samuel West went with Samuel Turner to mission Bristol in the summer of 1833. Their work developed a foothold in Bristol.

Petty relates that 1843, Samuel had to brave a dangerous crowd at Bicester. Having been beaten and pelted with eggs and stones, he needed to be rescued by a ‘humane gentleman’.

Samuel married Elizabeth Wheeldon (1796-1840) in 1835. Elizabeth had been an itinerant preacher in her maiden name, Hunt, until she married Richard Wheeldon in 1822. Following his death in 1826, she again ‘travelled’ as Mrs Wheeldon. After marrying Samuel they worked together as a team.