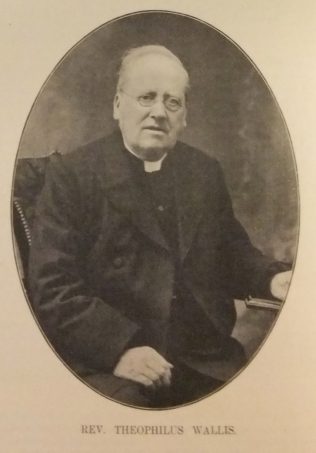 Theophilus was born on 26 July 1846 at Banbury to George Wallis and Harriet Maslin. George was a PM Minister. His brother, Frederick, also became a PM Minister.

Theophilus was educated at private schools at Faringdon and Swindon, under the tutorship of two Baptist ministers. He made his public commitment to Christ when twelve years old. Twelve months later he became a Sunday School teacher, and subsequently superintendent. Theophilus graduated as a local preacher under the tutelage of Rev George Fowler at Leamington and studied at Sunderland before entering circuit ministry.

His obituary records that Theophilus had able preaching gifts, good business abilities, a genius for friendship, with an abundant humour, and a great gift of tact. His library, his conversation, and his public efforts alike testified to the keenness of his mind and his catholic tastes. He had gripped and assimulated evangelical teaching and delighted in its declaration.

Theophilus served on the Ministerial Candidates Examination Board.

Theophilus suffered from impaired health, and after thirty four years active ministry was compelled to superannuate. He finally settled in Horsham, where he suffered family losses, and gradually became blind.