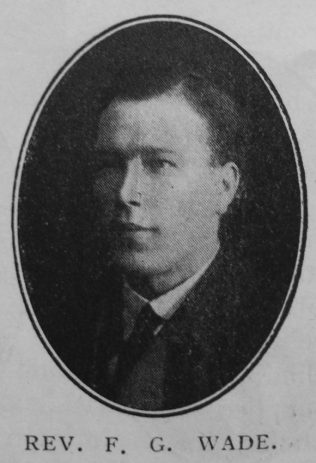 FRANCIS GLADSTONE WADE: born in 1890 at Helperby, near Thirsk. He entered the Primitive Methodist ministry in 1915 after training at Hartley College. He began his ministry in Glasgow and then followed a varied ministry of forty-one years in the following circuits: Wickhambrook, Sheffield, Wilton, Docking, Lowestoft, Pocklington, Norwich, Leeds, Hyde, and Oldham. In all except one of these circuits he was superintendent. He retired in 1956 at Oldham, where he became an active supernumerary, a position he coupled with a chaplaincy at the Oldham and District General Hospital.

Throughout his ministry he concerned himself with the wider interests of the Kingdom of God. He was prominent in Free Church councils, believing that this was an essential part of his ministry. He also found time to take am interest in local government, at one time being a member of the local Urban Council. As a preacher he was essentially an evangelist, but it was evangelism undergirded by an informed faith and inquiring mind. He was always interested in young folk, his talks to them were distinguished by shrewdness and challenge, and marked by a strong sense of humour. In his pastoral work he showed sympathy, understanding, and devotion, never sparing himself at any time.

He died 6th March 1957, serving his Lord, his Church, and his people to the end. He was in the sixty-seventh year of his age and the forty-second year of his ministry.

Before entering the ministry Francis worked as a boot repairer (1911),