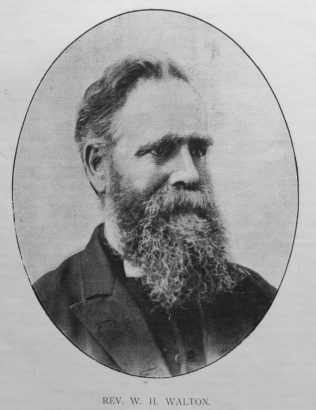 Transcription of article published in the Primitive Methodist Magazine by C. Anthony

MANY friends in this south land will be glad to see the portrait of Rev. W. H. Walton, whose thirty-five years of ministerial life have nearly all been spent in the Melbourne District. As the face, however expressive, does not say all, we have ventured to supplement the artist’s work with a few facts respecting our old friend and fellow-worker.

Mr. Walton was born at Pudsey, near Leeds, on March 31st, 1833. His parents attended the Congregational Church, but he was converted through Wesleyan Methodist agency when a lad of fourteen. He became a member of the little church where he was led to Christ, and remained so till the exciting times of the Reform Movement led him to seek a spiritual home among the Primitive Methodists.

In the year 1855 the Rev. J. Dodsworth, who was travelling in Bradford circuit, sought him out, and he was duly examined and put on the plan. In 1858 he was engaged as H.L.P. in the Burnley Station, under the superintendency of Rev. J. Hedley. Then being recommended as a candidate tor the ministry, he was pledged by G. M. Committee, and appointed by the Conference of 1859 to the Hastings Mission. Ministers being needed for Australia, he offered himself for Colonial work, and in company with Revs. E.C. Pritchard, W.J. Dean, and E. Greenwood, left England in July 1860, arriving in Melbourne November of the same year.

The venerable John Ride had been compelled to retire from active work, and had settled down in Benalla. Hence, Mr. Walton was sent to take up the work begun there, and though the difficulties were great, he continued two years and a half, labouring with considerable success. A minister  aving resigned in New South Wales, he was sent to Paramatta, but was shortly removed to Longford in Tasmania, for the benefit of his health. It was here, and on the North-West Coast of Tasmania, that he did noble pioneer work that resulted in the formation of one or two large circuits, the details of which may be found in our Colonial church records, He stayed in Longford four years, and having during that time missioned several places on the North-West Coast, he was appointed to open a mission there, and made Penguin the centre of his labours, here he remained till 1869.

Brother Walton is an indefatigable worker, and his tact, energy and perseverance have fitted him for opening new fields. Sale in Victoria, and North-West Coast of Tasmania, are a witness to his earnest and faithful labours. For many years he travelled on an average 100 miles weekly, preaching every night, visiting families in “the bush,” where at times the roads seemed impassable. Several times his life has been in peril both by land and water. On one occasion, when travelling on horseback, he found the Gawler river so flooded that he alighted and fastened his horse to a tree (the horse, by the way, bore the honoured name of “Clowes”), and proceeded to ascertain the feasibility of crossing safely. Whilst doing so, “Clowes” got loose and forded the river alone and started homewards,  leaving his master to do as he best could. The missionary, nothing daunted, divested himself of his clothes, and putting them in a bundle on his head, faced the rolling current, and with great difficulty kept his feet and reached the other side; then dressing himself, he hurried on and was thankful to find some friend had captured “Clowes,” and was ready to restore him to his master.

Incidents of this kind, which might be multiplied, show that Mr. Walton possesses the true missionary spirit. In October 1892, whilst out visiting in the “bush,” a throw from his horse resulted in a compound fracture of his left arm, beside a shock to his nervous system. But true to the past, he kept bravely at his work amid pain and weakness, and now his circuit, which when he entered it was very low, is gradually regaining its prosperity. Mr. Walton has done a large share of church-building and debt-liquidation in the stations in which he has travelled. He has erected thirteen churches, three parsonages, and one school-room, beside effecting improvements in existing fabrics. He has been fortunate in securing some good tracts of land for our church. In Penguin he purchased some forty-nine acres for £36, and sold his horse “Clowes” to pay first instalment. This will be a valuable property. He has also secured two-and-a-half acres at Bracknell, and valuable sites in other places.

Our friend has had his share of Connexional work and honours. He was President of our Assembly in 1881, General Committee Delegate in 1885, and has represented various committees at the yearly meetings. For several years he represented our church on the “Hospital Sunday Committee,” and as a recognition of his services he was unanimously elected an Honorary Life Governor of the Melbourne Hospital. His success in spiritual work has been most encouraging, and the confidence of the church in his tact and judgment was shown when he was by special appointment sent again to Gippsland, where the cause had been almost wrecked, and where under the Divine blessing he succeeded in re-organising and establishing societies.

Intellectually he may not be a giant; philosophy, metaphysics, or the more abstruse subjects of study have no charm for him. He is a plain, practical, earnest Methodist minister. Perhaps he excels most in preaching or talking to children, his love of anecdote, and he is full of it, fitting him to interest and instruct the young, whilst the older ones listen with equal attention. He does not live in his study. Books are not to him simply for mental exercise, but chiefly for illustrating his sermons. Had he been more of a student he might have been a profounder preacher, but perhaps not more useful.

He finds his joy in the regular routine of a Methodist minister’s life. Nothing tempts him from the old paths of preaching, visiting, and the other duties of his ministerial life, and in this respect he has earned for himself a good degree. He is a loyal Primitive Methodist, liberal and hearty in his support of its institutions and funds; a kind, sympathising friend; not free from weaknesses or infirmities, but one to be trusted and respected. He may sometimes have a tendency to look at the dark side of a question, and to show an undue sensitiveness. Still, he is a worthy, faithful worker, and one whose service in the past deserves honourable mention in the records of to-day. The church at home has no cause to fear for her name, doctrines, polity or success. in the colonies, while such loyal ministers are being multiplied amongst us.

Before entering the ministry William was a wooden weaver (1851).

He was President of the Australian Conference in 1881.