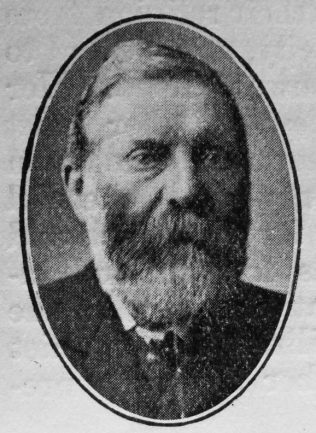 “To know a man, live with him.” Better and truer, to love a good man is another and better life to the lover. This is our grateful joy in Edmund Warters. And he is not gone but ascended. “Onward ever.” With life renewed Hezekiah said, “I shall go softly.” With life released Edmund Warters now goes sublimely. He follows the Lamb whithersoever He goeth. Movement and march forever!

Born September 27th, 1835, at Malton, his forbears were of our early church. Converted at twelve he began to preach at sixteen. Educated for the teaching profession his church abruptly claimed him, and Scarborough, Leamington, Southampton, were his circuit spheres. A throat difficulty compelled retirement. At once he became more than a minister, serving without stint. His was a manifold life. To each place where he resided he was at once a pillar and a garland — God’s nobleman. A volume of letters reveals the high appreciation and sustained admiration of the writers. Spite of his throat trouble he was ever ready to preach, an ideal school superintendent, trustee, giving help at the critical moment. A model man within the noble order, mis-named “lay-preachers.” Some of these letters deserve to be read before the Sacrament in all our Quarterly Meetings.

“Mr. Warters was a good man,” writes Rev. T. Whitehead, “kind and true, and he will be greatly missed.”  “I recall my first acquaintance with him,” says Rev. J. Tolefree Parr,  “and his influence upon me as a young minister. I owe much to him. His gentleness, his culture, his spirituality, and his intense loyalty to his Lord all profoundly impressed me.” “He was so true, so genuinely good, that we felt the stronger in his friendship,” writes Rev. H.J. Pickett.  “His was a great life in the best sense.” Rev. James Travis writes: “He has for long years been a devoted officer of our church, and deserves to be held in respectful memory by our people.” “His fine character,” writes Rev. James Pickett, “his devotion and uprightness helped to make the world richer, and now that he has gone we are all the poorer and the weaker.”

“Mr. Warters was a very old friend of mine,” writes Mr. Thomas Lawrence, “and the intimate relations in which we stood to each other in no way lessened my appreciation of him. I was planning in my own mind how I might see him once more, and now my old friend has crossed the Bar and can be seen by me no more until I join him in the beyond.”

“He was, I believe, without exception,” writes Mr. T.H. Cormode, a member of the House of Keys, “the most conscientious man it has ever been my privilege to know. Some of the positions he occupied in the church and on the Island it will be difficult to fill adequately and promptly.”

It was as “the kindness of God” that when our beloved friend found his release on Nov. 27th, 1907, it should be in the charming Isle and within the lovely home of Douglas “Front,” the heroic lady, precious wife of his later years, by his side; also sharing in the autumn the refreshing presence of his dear sister and brother Rev. T. and Mrs. Markwell;  then as the year was ending the cage-bars crumbled and the spirit dared its liberty and took its flight to be forever with the Lord. To have lived within the circle of his friendship, to have felt the life and found the identities that gave him conspicuous and imperishable character—that is life by addition and cumulative blessing and glory. So we praise God for the life and inheritance in Edmund Warters.

Edmund was born on 27 September 1835 at Norton, nr Malton, Yorkshire, to parents John Waters, a cordwainer, and Mary Longfield. He was baptised on 25 October 1835 at Malton PM Chapel by John Day