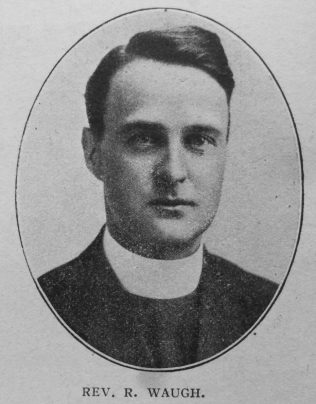 Obituary published in the Minutes of Conference.

Robert Waugh: born in Fletchertown, Cumberland, on 1st November 1891. Educated at Whitby Primitive Methodist School, Ellesmere Port, Cheshire, he entered Hartley College in 1919 after service in H.M. Forces. In 1922 he married Mary Foxall, who shared his ministry to the full. He served in the following circuits: Manchester IX, Kingstone, Swindon II, Scunthorpe, Bexhill, Ramsgate, Manchester (Eccles), Oldham (Hollinwood), Burton-on-Trent (Parker Street), Preston (Fylde Road and Moot Lane), Preston (Trinity), and Frodsham. He retired to Whitby, Ellesmere Port, in 1958. He was very proud of being a Methodist minister and always wore his clerical collar, not out of habit, but from a love of his calling and a desire to communicate this to other people. He was a man of meticulous self-discipline, a quiet disposition, and a great affection for people of all ages, and these aspects of his personality were constant features of his ministry. After his retirement he continued to conduct worship but, due to his wife’s illness and his own, eventually had to give up. He continued to worship at Whitby Methodist Church and was very appreciative of every kindness shown to him, regularly having an encouraging word and a ‘thank-you’ for preachers after the Sunday services. He died on 2nd February 1976 in the eighty-fifth year of his age and the fifty-eighth year of his ministry

Robert was born to parents Thomas Waugh and Ellen Maria Broughton. Thomas worked on a farm (1901) and later as a baker and confectioner (1911).

The 1911 census records Robert working as a baker.

Robert married Mary Foxall (1892-1974) in the summer of 1922 in the Wirral Registration District, Cheshire. Birth records identify one child.