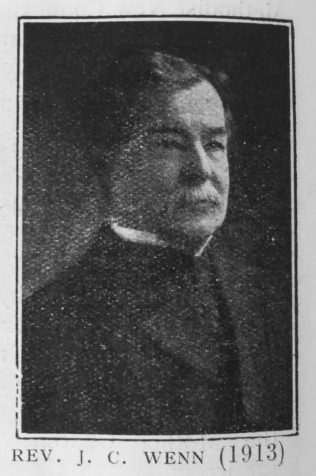 JOHN CHARLES WENN: born at Outwell, Norfolk, in 1850. He entered the Primitive Methodist Ministry in 1872. After a term in the Sunderland Institute, he began his ministry in Glasgow, and for forty years served with ability and faithfulness in both town and country circuits. He was a man of wide culture, deep insight, and sound judgment. He was brotherly and unassuming. His preaching was forceful and convincing. He was a devoted pastor and loyal friend. He delighted especially in the fellowship of his brethren, and was beloved by them. He retired from the active ministry in 1912, but continued to serve the churches. He entered into rest on February 4, 1940, in his ninety-first year  nd in his sixty-eighth year as a Methodist minister.

John was born on 17 January 1850 at Outwell, Norfolk, to parents Charles, who worked the land, and Rebecca.