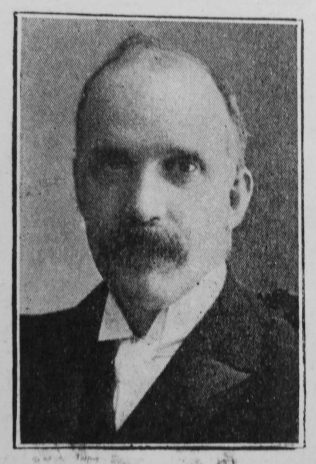 Rev. Wm. Wheeler was born in Durham city, July 8th, 1856, and ascended to be with God August 29, 1907. So true and strenuous was his life, and such the sweetness of his personal qualities that his departure caused deep and widespread sorrow, and an aching sense of loss in all who knew him either as pastor or friend. Born into a Primitive Methodist home, his youth was spent in an atmosphere favourable to the fulfilment of the Divine will concerning him. His grandmother was one of our first trophies in old Dunelm, and as a class leader wore to the end the quaint dress by which the earliest of our women expressed their separation from the world. His mother was a woman of deep piety who was wont to gather her children round her knees that she might teach them the truth so living to herself. His father, though a working man, was a lover of good books, and saw to it that his sons had an introduction to the masters of English poetry and prose. It is not surprising that of the five boys reared in that home, which was Church and University in one, four found their way into our pulpit and three into the regular ministry. It is sad to think that all three have gone; and yet each in his own way made proof of his calling, and left behind him a noble page in the history of his church.

At the age of eleven William fared forth to earn his living. At fourteen he was apprenticed to Mr. Walker, printer to the Durham University, and served seven years. His occupation strengthened a natural love of knowledge, and reading became a passion. Even then, caring little for the ordinary amusements of youth, a book in a nook was his chief delight. Converted at sixteen he joined the church of his parents. Simultaneously with his elder brother John he was placed on the plan, and with its numerous pulpits and with congregations knowing what qualities were needed for success in the handling of the word the circuit was one to develop the preaching gift. Both brothers were recommended for the ministry, and at the close of his apprenticeship William entered the Sunderland Institute, which as he testified aided the formation of habits of study of infinite value in after days. He was appointed by the Conference of 1879 to Saffron Waldon, a field sometimes spoken of as the most difficult in the Connexion.

Here he broke down in health, suffering a six months’ affliction similar to that which twenty-eight years afterwards laid him low. Grays and Romford was his next station, and then Walthamstow, where Thomas Jackson was his superintendent, a letter from whom speaking warmly of his faithfulness and ability, lies before us. Then followed Manchester (Ardwick), Huddersfield, Gainsborough, Hull (Clowes), then becoming superintendent of York (Victoria Bar), Castleford and Leeds (Princes’ Field), to which station he removed only to die. Some of these circuits were very difficult, York having financial burdens, while in Castleford the circuit chapel was burnt to the ground. With all these trying tasks he grappled manfully and with success, for he had a mind to work. In Leeds he looked forward to the accomplishment of yet better things.

The fine manliness of our friend’s nature first claims attention, a manliness manifest in all his dealings and under all circumstances. He was a man of many and sore trials. Marrying in 1883 Eliza, daughter of W. Plommer, Esq., of Boughton, Kent – a woman of beautiful disposition as well as of fine character, talents, and accomplishments, he seemed destined to enjoy the happiness of a perfect union. Alas! a few years saw her snatched from his possession in giving birth to her second child. This left a void in his life he never sought to fill. He was called to follow two brothers to the grave. Sickness cast its shadow over his home, a shadow all the more sombre that no faithful wife was by his side to share the anxieties of the hour. In spite of all he was always brave and composed – even cheerful. Nothing diminished the natural kindness of his heart – the natural geniality of his manner. Modest and unaffected in soul, transparent and guileless as a child, thinking always the best of his fellows he had a genius for friendship, and men loved him because they could not help doing so.

His sympathy, surviving the chill of his own sorrows, was but too readily extended to the distress of others; his mind was but too open to the necessities of those around him. Yet his was a strong spirit. Shams of every kind he hated. Clericalism he despised. He never feared to tell the truth even though it hurt, but he had the arts of courtesy at command, and reproachful truth was always told in love. He was without jealousy because he was without unworthy ambition. Place, power, or applause he could not seek. To do his duty, to render the service of affection to his motherless children, and to be a blessing to the weary erring souls to whom he ministered, here lay at once his ambition and his joy.

As a preacher he was logical, faithful, forceful, and intensely practical. A reader ranging over wide fields of literature, his mind was fully stored, and he had a faculty of pressing into his pulpit work the knowledge thus accumulated as well as that gathered by observation of men and things. An earnest student of the Bible his discourses were fragrant with the message and spirit of the Gospel. He possessed imagination, fire, and the passion for souls. He loved his Saviour. He loved the beauties of nature. He loved the poets. He loved his fellow men. He had a joy in the society and ways of little children. He was intensely human, discreet and brotherly, and his preaching was such as might be expected from one whose interests and traits were such as these, whose heart was so kind, whose piety was so sincere.

The results of his ministry it were difficult to tabulate. Material interests were advanced – churches were edified, men and women were saved to God. Neither the man nor his methods were sensational. He stayed more than the average term upon his circuits, and left behind him in them all hosts of friends. District office was conferred upon him. Several times he was elected delegate to Conference. These marks of honour testify at once to the worth of his ministry, and to the ability and character of the man – the more so that they were entirely unsought.

The end of this useful life came unexpectedly and in the heyday of its enterprise and power. Smitten down in a moment by apoplexy the sufferer lay for many days unconscious, and although at the end of this time he came again to perception of his surroundings he remained to the close totally unable to speak. Within a month he died. After an affecting service at Princes’ Fields Chapel, Leeds, the interment took place at Huddersfield in the tomb which sixteen years before had received the dear form of his wife, whose memory he had so fondly cherished. Sixty of his ministerial brethren and officials and members from many circuits attended to show their respect for the departed and their sympathy for the son and daughter left sorrowing behind. From all parts of the country have come letters written by ministers and laymen, all of which testifying to noble character and service, were chiefly remarkable for the note of personal affection they contained.

Among these it will not be invidious to mention a tender note from the Rector of Castleford, who would have been present at the funeral had it been at all possible, and one from Mr. Compton Rickett, M.P., whose friendship our brother had enjoyed. So passes from our midst one whom we shall long and sadly miss. As a dear, dear friend, a faithful and true brother, a servant of Jesus Christ who helped us to our better selves and encouraged us in many an hour of need, a good, noble, and genuine man – thus will we think of him, and the thought shall give us courage for the lonelier years to come.

William was born on 8 July 1856 at Durham, to parents George, a woolsorter, and Ellen.

He married Eliza Plommer (1859-1891) in the summer of 1883 in the Faversham Registration District, Kent. Census returns identify two children.