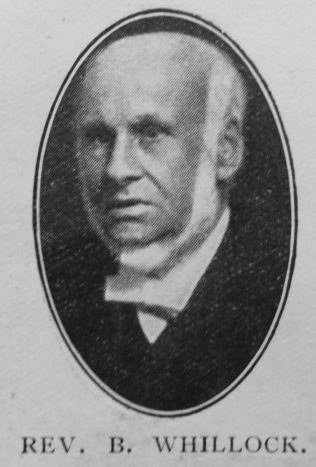 Transcription of obituary published in the Primitive Methodist Magazine by Wm.H. Acornley

Rev. Benjamin Whillock passed triumphantly to the glory-land on the morning of February 14th, 1910, at the ripe old age of nearly ninety-one years. He was born at Birmingham, England, April 9th, 1819.

His father died when he was quite young, and the training of the boy devolved on his pious mother, who was a member of the early Primitive Methodist Church. Meetings were held in the home, and his earliest recollections were associated with Primitive Methodism in its formative period. Converted at the age of fourteen, he began to exhort and preach shortly afterwards, and at twenty-one years of age was called into the regular ministry, and stationed to Stalybridge Circuit in 1840.

He laboured very successfully on a number of stations in England, Scotland, and the Isle of Man, and in 1870 crossed the Atlantic, and joined our Western Conference. After a few years the health of his family made it necessary to come East. After serving several stations in what was then called the Eastern Conference, he was granted a supernumerary relation in 1881. Increasing infirmities compelled him to retire from the active work in 1883.

Since that time he has lived for the most part with his daughter, Fanny, the wife of Rev. C.S. Arnett, A.M., of the Methodist Protestant Church. He retained his connection with the Pennsylvania Conference, to which he sent an annual letter and a donation to the Connexional funds. The funeral services were held at the home of his daughter, at Baltimore, Ind. Revs. H.G. Russell and William H. Acornley, representing the Pennsylvania Conference of the Primitive Methodist Church, took part in the services, both at the home and at the grave.

Rev. Dr. Tagg, editor of the Methodist Protestant at Baltimore, paid a beautiful tribute of respect and honour to departed worth. He said that the story of our brother’s conversion sounds like a fragment of Pentecost. The weary burden of sin that distressed him; the difficulties that were interposed when he did begin to seek his Lord; the indifference with which his suit was met by his elders; the light and joy that broke upon him at the last when “God shined in”; the subsequent steps by which he was led on into deeper experiences and richer unfoldings of the Spirit, until he reached the ministry; and the providential interpositions that steadily opened to him his life work, were all evidences of that “old-time religion” which changed men into workers, and made them heroes of the cross.

He had studied the Word of God to profit. So thoroughly did he know his Bible that he always had an appropriate verse at ready command for any occasion.

His faith in Christ was fixed by a definite experience of saving grace, and then it was rooted in the clearest conceptions of the doctrines of the gospel. The Word supplemented his experience, and together they moulded his life and character.

In the evening glow of his later hours the mellowing light of heaven actually flooded his soul with the golden glory of the upper world. God was not leaving him in the darkness to struggle alone. He who conquered the last enemy was right by his side, and Brother Whillock knew that He was nigh. He felt that the house of many mansions was already opening its pearly gates to receive him, and his soul actually revelled in the joy of anticipating it.

The remains were taken to the beautiful cemetery in East Baltimore, there to rest until the resurrection. May the sorrowing ones meet him in heaven.

Benjamin was born on 9 April 1819 at Birmingham Warwickshire, to parents Benjamin, a cordwainer, and Dorothy. he was baptised on 31 May 1822 at St Martin, Birmingham.

The 1861 census return records Benjamin as a photographic artist and dissenting lay preacher.