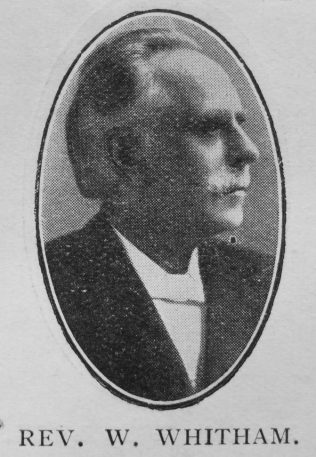 Worn out by the toil of years, Bro. Whitham passed home to God November 10th, 1909. Born at Stockport, in 1848, most of his boyhood days were spent in the home of Mr. Wilkinson, a Stockport draper. Under the preaching of the Rev. Ishmael Jones (Wesleyan) he was led to Christ. After spending a few years in America, in association with the Methodist Episcopal Church, he returned to England, and entered the ministry of our own Church in 1874. On Manchester Fourth, Barrow, Chester First (twice), Folkestone, Manchester First, Littleborough, Ellesmere Port, Fleetwood, Liverpool Fourth, Elland, Rochdale, Oldham Fourth, and Aberavon Circuits, he exercised his ministry, experiencing much joy and success in his work.

His spirit was full of optimism and courage. Even in his affliction he was the same cheery, hopeful, genial soul. As a preacher he was earnest, evangelical, and eminently practical. He sought to win a verdict for his Master, and to build up believers in their most holy faith.

On the platform he was an effective speaker. As the sworn enemy of privilege and monopoly, he pleaded passionately for the poor and down-trodden, and helped many a stricken soul to face life’s burdens with new hope and courage. He was an ardent politician, a lecturer for the National Reform Union, and a member of the Liberation Society. He sought to infuse a new spirit into politics—to Christianise them and make them real.

At ministerial associations his humorous sallies and epigrams were much enjoyed, and no session could be dull where his voice was heard. And what a friend he was! How exceedingly genial, tender, and true. The Rev. Jas. Watkin testifies: “He was an honest man, a successful minister, a loyal friend. His piety was transparent. He had the heart of a boy linked to the solid judgment of a man. He had the rarest of all virtues—he could glory in the success of his friends and colleagues.”

His last colleague, Rev. Chas. Moore, says: “It was a joy to stand by his side in serving the interests of our Connexion. He loved to be at work. It was impressive to see how he strove to keep up the speed of former days. As a man he abounded in sympathy, kindliness, and geniality. He gave to Primitive Methodism a ministry full of labour, and we know his reward will not be small.”

About four years ago—when on the Rochdale Circuit—his health began to fail, but he regarded the failure as only temporary. A little rest and quiet, and he would be in the thick of the fight again. And so he was, but not for long. The Conference of 1909 stationed him at Aberavon, hoping the change would do him good. The few months he spent on this station were amongst the happiest of his life. In the ode of pleasant surroundings and kind friends his health began to improve, and he was often heard praising the Lord and declaring he felt like a new man. But, alas! this feeling was no true index of permanent improvement. Like the hectic flush on the cheek of consumption, it was the semblance without the reality.

The Saturday before his death he lectured on “John Ruskin,” and on the following Wednesday he passed to the “Great Beyond,” leaving a wife and daughter and two sons (one of whom is a Wesleyan minister) to mourn his loss. The Revs. J. Whittock, G.H. Southall, and S. Bryant took part in the burial service, which was largely attended, and on the following Sunday the Rev. J. Goldthorpe conducted a memorial service in Aberavon Chapel. He now “rests from his labours,’’ and no one will grudge him the recompense his hard toils have won.

“The silver cord is loosed, the golden bowl is broken. We lament: thou dost rejoice. Adieu, beloved friend; peace to thy soul.”

“Servant of God, well done!
Rest from thy loved employ;
The battle fought, the victory won,
Enter thy Master’s joy.”

William was born on 8 January 1848 at Hulme, Manchester, Lancashire, to parents John, a coach builder, and Eliza. He was baptised on 16 September 1849 at Manchester Cathedral.

He married Elizabeth Edwards (b abt1856) in the summer of 1878 at Birkenhead, Cheshire. Census returns identify three children.