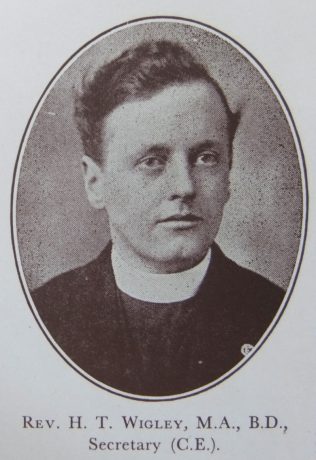 HENRY TOWNSEND WIGLEY, B.A., B.D.: born at Shettlestone, Glasgow, in 1893. He was a son of the manse, and was educated at Liverpool Institute, and Manchester University. He entered the ministry of the Primitive Methodist Church in 1917 after training at Hartley College. He then served in the following circuits: Halifax I, Northampton I, Orrell, Oldham I, Liverpool (South) and Northampton (Kettering Rd), where he lived for twenty-four years of his life, ten in retirement.

At the time of Union he was chosen to be one of the Methodist Guild Secretaries and became known throughout the Connexion. He was President of the Christian Endeavour Union in 1936-37. At a later stage he was invited to become the General Secretary of the Free Church Federal Council, an appointment in which he served with efficiency and distinction for seven years (1945-52). Ever a loyal Methodist, he won the respect and affection of all Free Churchmen, for with real conviction he advocated the values and principles they preserved.

He was a man of strong personal belief, concerned in the presentation of sound doctrine, and for many years was a member of the Faith and Order Committee. He was gifted with a logical and incisive mind, and was formidable in debate. He was long associated with the United Kingdom Alliance, and spoke and wrote effectively on moral problems. But first and foremost he was a preacher and evangelist. He commanded attention and spoke with authority. He claimed that the pulpit was a jealous mistress, and indeed he devoted his considerable powers in commending his Lord. His strength was the outcome of prayer and a convincing biblical faith.

He loved the people to whom he ministered, and rejoiced in the affection of his many friends. Throughout his life he was an encourager of young people. His life was full and active, and one was surprised to discover the range of his interests. He was always a keen student, possessed an amazing fund of information on railways, an enthusiastic follower of football and cricket, and no mean musician. For many years he was a member of the Board concerned with the Methodist Guest Houses, and involved in their well-being and management.

He exercised a memorable and notable ministry, and died suddenly on 26 May 1970 at Knaresborough, whilst staying with his ministerial brother, in the seventy-eighth year of his age and the fifty-third of his ministry.

Henry was born on 27 April 1893 at Glasgow, Lanarkshire, to parents Albert John Wigley, a PM minister, and Elizabeth Townsend.

He married Emily Elizabeth Mather (1893-1964) in the summer of 1920 in the Halifax Registration District, Yorkshire. Birth records identify two children.

Henry died on 26 May 1970 at Knaresborough, Yorkshire, although he was normally resident in Northampton.