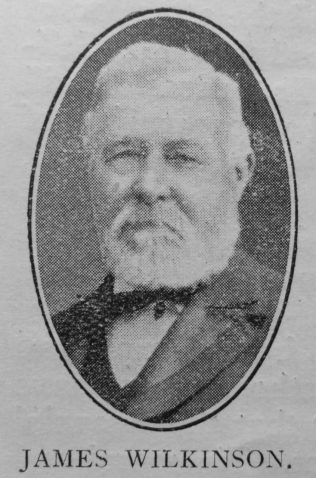 Transcription of obituary published in the Primitive Methodist Magazine by J. Keightley

With startling suddenness Bro. Wilkinson was called into the rest eternal, and the Sheffield Fifth Circuit lost one of its most valued officials. He was at morning service on Sunday, June 27th, and in reply to enquiries said he was in the best of health. Shortly after retiring at night he had an alarming seizure. He did not regain consciousness, and the end came with the early morning of June 28th.

He was born at Pocklington in December, 1841, spent a good many years in Sheffield as a builder and contractor, and contemplated retirement at no distant date. He was one of the kindest of men, of a retiring disposition, but a faithful Church official and treasurer to the Benevolent Committee, John Street.

The esteem in which he was held was shown on the day of his interment and at the memorial service conducted by the Rev. J. Keightley, on Sunday, July 4th.

He married Ann Walker (b abt1844) in the summer of 1863 at Sheffield, Yorkshire. Census returns identify two children.