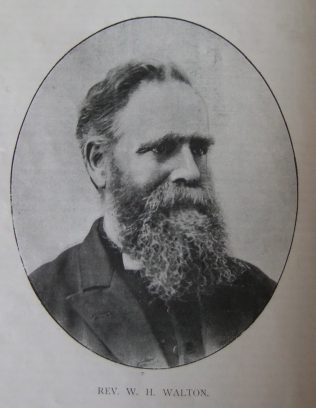 William was born on 31 March 1833 at Calverley, Yorkshire to parents Samuel Walton and Ann Johnson. He was baptised on 2 May 1833 at Pudsey New Chapel (Independent). His parents were Congregationalists.

In 1851, William was working as a woollen weaver.

William was converted at the age of 14 through the Wesleyans. He remained a Wesleyan member until the Reform Movement caused him to move to the Primitive Methodists. In 1855, William went on the plan. In 1858, he became a hired local preacher at Burnley, Lancashire.

William offered for colonial work and left for Melbourne in July 1860 along with E C Pritchard, W J Dean and E Greenwood.

For many years William travelled on average 100 miles weekly, preaching every night, visiting families in the ‘bush’ where at times the roads seemed impassable. He was responsible for erecting 13 churches, 3 parsonages and one schoolroom by 1894. He had a horse called Clowes, which he sold to pay for the first instalment on some land at Penguin for a chapel.

William was the President of the Australian Assembly in 1881. He was made an Honorary Life Governor of Melbourne Hospital.

He was a plain, practical, earnest Methodist minister. Perhaps he excelled most in preaching or in talking to children. His love of anecdote, and he was full of them, fitted him to interest and instruct the young.

William died in 1910 in Australia.