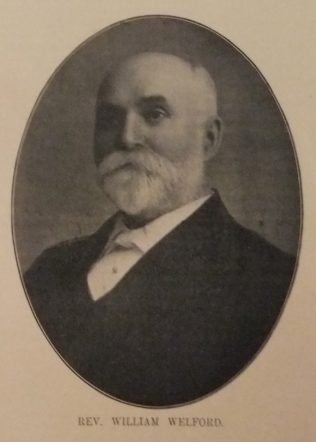 William was born on 4 December 1847 at Barnard Castle, Co Durham to parents Thomas Welford and Hannah Haigh. Thomas was a master tailor. His elder brother, John, was also a PM Minister.

After a brief term of service at Santa Isabel, William was imprisoned by the Spanish Government and ultimately banished from the island.

William was musical by nature, and gave close and constant attention to this important part of divine worship. He got the best out of his choirs, and good choral and congregational singing contributed to the spiritual efficiency of his services.

As a preacher, William was clear and practical; he was evangelistic and outside the pulpit he often led the way in Temperance and other social reforms. Along with John Hallam, William was one of the first Passive Resisters in the London Boroughs, being brought before the Islington magistrates. Shortly after, William was elected President of the Islington Free Church Council.

Shortly after arriving at Hull, doctors pronounced that William was suffering from ‘heart disease’ and he had to immediately retire from circuit work. William settled at West Kirby on the Wirral.