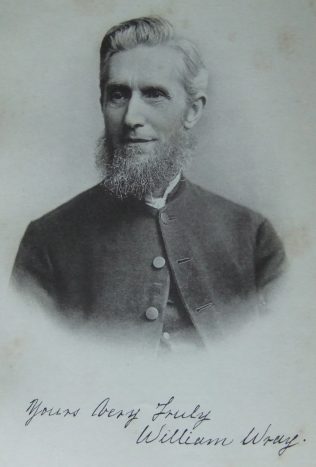 William was born on 8 June 1838 at Kirmington, Lincolnshire to parents Thomas Wray and Jane Spalding.

William’s youthful years were spent with grandparents, Richard and Elizabeth Spalding, who were Primitive Methodists. They provided a home for visiting preachers. In 1851 he was working, aged 14, as a wheelwright.

William gave himself to Christ aged 19 through the ministry of Rev Henry Clark. A year later he was on the plan. William was recommended for the itinerant ministry by John Petty.

The 1890 biography records that, as a preacher, William was well informed in Biblical lore and Methodist theology. His sermons were well prepared, and were not few. He was ever practical, He never attempted to tickle the ears of his congregations, or to meet their soul-needs by giving them mere theoretical speculations. His purpose was to inform the mind, convince the thinker, build up the believer in all that is good, and win men from the service of Satan to that of Christ. His pulpit ministrations were characterised by forcefulness, meekness, faithfulness, and profit.

William was Building Committee Secretary in the Manchester District for 9 years and held the same role in the London 2nd District for 8 years. He was twice a General Committee Delegate and three times chair of the District Meeting.

To 1890, William was connected with the erection of 30 new chapels, 12 new schools and a further 12 chapel and school alterations costing over £55,000. In most cases, William prepared the plans and superintended the erection. William acted as Clerk of Works for the erection of the Manchester College.

William’s obituary records that William was a man of quiet bearing and few words, he possessed a big heart, had a quick, clear, sound judgement, an infinite capacity for detail, an aptitude for steady plodding industry, an incapacity for petty jealously or scheming for personal advantage.