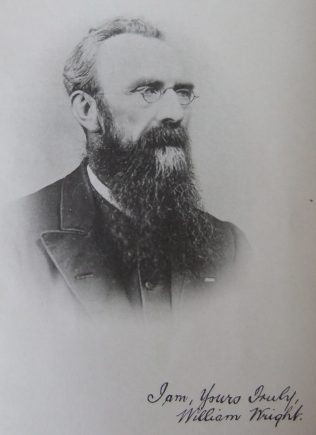 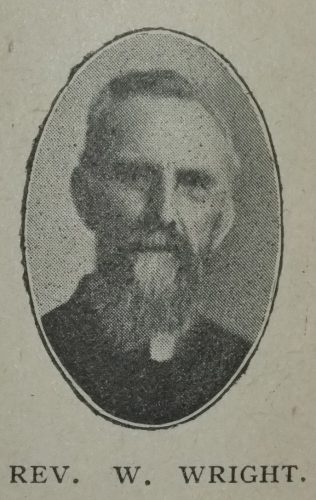 William was born on 5 June 1836 at Little Caughley, Shropshire to parents Richard Wright and Ann Huffa. Richard was a gamekeeper.

Both parents had died by the time William was 12 and he went to live with his uncle, a publican at Clive, Shropshire. By the time he was 18, William was the recognised leader of a gang of young fellows who delighted in drinking, Sabbath desecration and other forms of godlessness.

On 20 May 1854, William attended a camp meeting at Clive, intending to cause disruption with some friends. The president of the meeting was Rev J Huff. Contrary to his expectation he left the meeting converted. There followed a striking change in his life.

William’s name went on the plan, but on account of the opposition with which he met at home, he could only take a few appointments. This led eventually to William moving to lodgings with an official of the PM society.

Most of William’s ministry was spent in the West Midlands District and he, at different times, undertook the role of secretary at all it’s committee meetings. He attended three conferences ans was twice a General Committee delegate.

During his active ministry, William superintended the erection of 19 chapels, 5 new schools and had over 3000 professed conversions.

As a preacher he was always interesting and forceful, and often eloquent. He read many books, but was a greater reader of men and things. He made the best of his materials and things. He always looked on preaching as a solemn thing, a thing which ought to palpitate with the life of God.

William was seen at his best out of doors, speaking in the street, conducting a camp meeting or delivering an address as some district gathering or conference.