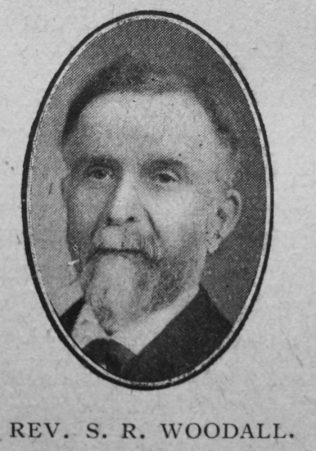 Samuel Russell Woodall belonged to the band of devoted, self-sacrificing men who have been the real makers of Primitive Methodism. He was dowered with gifts far beyond the ordinary, and, if he had applied himself either to art or business, he would have gone far and done well. He was a skilled musician, and he possessed the temperament and magnetic influence which enables the trained violinist to stir the heart, rouse to enthusiasm, or awaken tears. With all his artistic gifts, he had, however, the great business aptitudes, which, combined with high character and steady perseverance, lead on to fortune. These things were as but dust in the balance when the call came to serve Christ and His Church.

He was born at Dudley, in 1853, but in early childhood he removed to Wolverhampton. When very young he exhibited unusual skill as a violinist. A Roman Catholic priest was his first teacher, and he advanced so marvellously that he was soon the leading pupil of one of the greatest teachers in the Midlands. When seventeen he joined our Church in Wolverhampton, and although he remained in association with a famous orchestra, and played as a violinist at the Birmingham Musical Festival in 1869, his life was turned to higher service, and he began to prepare for the work of the Christian ministry.

He was stationed at Todmorden in 1878, and he spent his best years, and rendered his most fruitful service within the bounds of the Manchester District. Six splendid years were spent on Manchester VIII. station, and six at Hollinwood, Oldham. Ten years were devoted to Tunstall, Ashby, Burton and Northampton, and thirty years were given to Manchester.

S.R. Woodall did more than a fair share of chapel-building and money-raising. His chief glory, however, was to do the work of an evange=list, and he was used to lead a great host from darkness to light, and from the power of Satan unto God. For many years he served his district very efficiently as temperance secretary.

He was a great home-lover, and in the person of his wife (a sister of the Rev. S.L. George) he found a devoted companion and efficient helpmeet. Their two sons have won great distinction. One is a Master of Arts and the other a Doctor of Medicine. Mr. Woodall superannuated at the Conference of 1919. After a very short period of retirement at Blackpool, the end came. His loved ones and his friends miss his cheery presence sorely, but the churches where he served so splendidly thank God for the sift of a good man.

Samuel was born on 24 November 1853 at Dudley, Staffordshire, to parents John Woodall and Rebecca Russell. He was baptised on 12 December 1852 at Worcester.

He married Tryphosa Helena George (1851-1948) in the summer of 1882 in the Wolverhampton Registration District. Census returns identify two children.