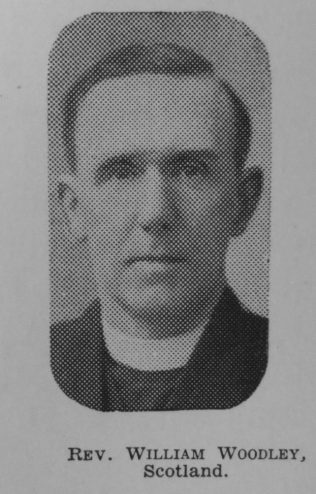 WILLIAM WOODLEY: born at Sheffield in 1880. The singing of ‘Blessed Assurance’ by a group of Y.M.C.A. workers opened the door for him into a Christian experience. He joined the Primitive Methodist Church, and, at the end of his engineering apprenticeship, was accepted as a candidate and sent to Hartley College in 1902. The whole of his probation was spent in the Pontypool circuit shepherding young converts of the Welsh Revival. The influence of this early experience coloured the whole of his ministry.

He was of vital and forceful personality, a powerful preacher, dwelling always on the great themes, and a greatly beloved pastor. In his private devotions he made daily use of his Greek Testament. As secretary of the Scotland Synod, he rendered magnificent service, especially during the periods immediately before and after Methodist Union. Having served whole-heartedly and tirelessly in circuits in Wales, Scotland, and England, he became an active supernumerary in the Hull (North) circuit in 1944.

Retiring to Nuneaton in 1950, he continued to serve in many ways. On his birthday in 1953 he went to ‘Highbury’ Weston-super-Mare, to act as host. There he died on the following day. The call had come and he was up and away to higher and fuller service in the city where ‘they serve Him day and night in His temple’. He was in the seventy-third year of his age and the forty-sixth of his ministry.

William worked as a machine knife maker before entering the ministry (1901).

He married Beatrice Turner (1880-1965) in the summer of 1908 at Sheffield, Yorkshire. Census returns identify two children.

William died in 1953 at Weston-super-Mare, Somerset.