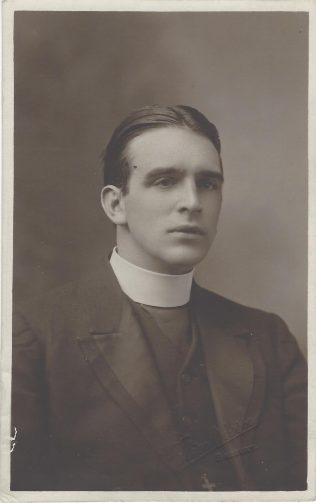 ALFRED CAMPION WRIGHT: born in Crewe in 1890. He entered the Primitive Methodist ministry in 1916, after training at Hartley College. During the 1914-18 War he served with the Royal Army Medical Corps. Demobilisation was followed by five years in the Banbury Circuit, then four years at Blandford, and four years at Cardiff, where he acted as Secretary of the South Wales District Synod at the time of Methodist Union. He then served at Ramsey (I.o.M.), Birmingham, Smethwick (Regent Street), Beccles, Normanton, Stoke-on-Trent and Kirby Moorside, retiring in 1958 when he settled in the Birmingham (Wesley) Circuit. There, he entered into the fellowship of the Villa Road Church, where he had been the minister a quarter of a century before, and where he was a welcome visitor to the homes of the people.

He retained his lifelong love for young people, and became chaplain to the Villa Road company of the Boys’ Brigade, accompanying them to camp. During his retirement he loved to preach, and also took an active part in the church’s Bible Study Group. Those who were privileged to know him marvelled at his erudition, and his deep and wide interests. His sermons and addresses revealed his wide reading in Biblical and historical subjects. He was an expert bee-keeper and chess was also one of his special interests. In an age tending toward conformity he was a nonconformist in the best sense, an individualist, a capable circuit minister, and a loyal friend.

He died on 21 July 1963 aged seventy-two and in the forty-seventh year of his ministry.

Before entering the ministry, Alfred worked as a grocer’s assistant (1911).

He married Elizabeth Winifred Gardner (1897-1979) in the summer of 1922 in the Shipston on Stour Registration District, Warwickshire. Birth records identify three children.