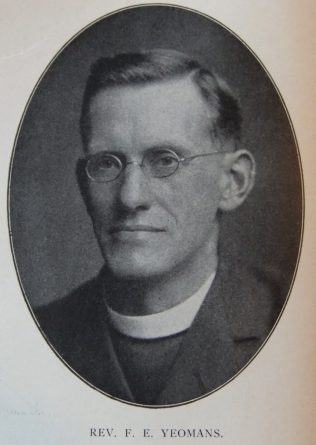 Frank was born in 1874 at Market Drayton, Shropshire, to parents Elijah Yeomans and Clarissa Edge.

Frank became a local preacher at the age of eighteen. He prepared himself for the teaching profession, and for a few years served in that capacity; but on the death of his father he gave up teaching to take charge of his milling business in Essex. About that time, Frank felt a very real call to the ministry, and under the guidance of Rev Joseph Taylor studied for the Candidates’ Examination. Frank secured a position on the Reserve List, and was sent to circuit work without College training.

Whilst at Cardiff, Frank was Chaplain to the 3rd Western General Hospital. At Yeovil, he was Chaplain of the Infirmary. Frank was also active in the Temperance Movement.

In his various circuits Frank was associated with Toc H, the Brotherhood Movement and the Free Church Council. His uniformly friendly association with the Church of England exemplified a characteristically catholic spirit.

His obituary records that he was an impressive and evangelical preacher, a kindly and sympathetic pastor, and a lover of orderly and dignified worship.