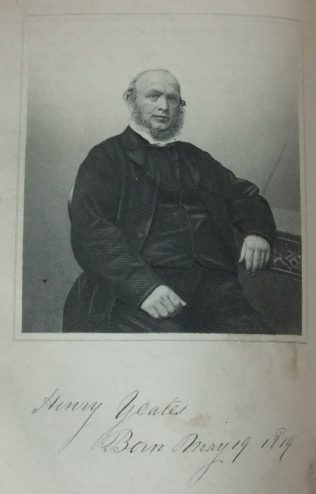 Henry was born on 19 May 1818 at Monmouth. He spent his early years in an ironmonger’s establishment.

Henry was highly esteemed in the Brinkworth District where he spent his ministerial life.

The PM Chapel at Aspley Guise was registered by Henry in 1849 whilst he was the minister in Newport Pagnell. In the 1851 census of chapels, the Primitive Methodist chapel on Aspley Hill had 70 attending in the morning and 100 in the evening. Seating capacity was 80.

When the Oxford to Birmingham railway line was being built there was heavy work at Horbury with a deep cutting and a tunnel. A large number of men were involved and Henry ministered to them in every way at camp meetings and open-air services and let no opportunity slip to win them to Christ.

One day a navvy had met with an accident. Henry took him into his own home to be nursed by his wife until a proper home could be found for him.

His obituary records; ‘He was especially gifted to stir and edify a congregation. He had a commanding presence, a rich deep voice, robust health, mental alertness and facility of expression, combined to produce a personality of no mean order.

After the death of his wife, Henry spent his last days with his daughter Eliza. Henry died on 21 November 1895 at Brierley Hill, Staffordshire and was buried at Basingstoke cemetry.