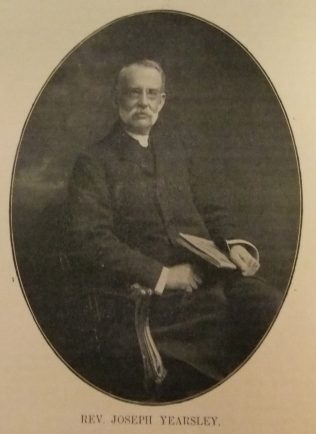 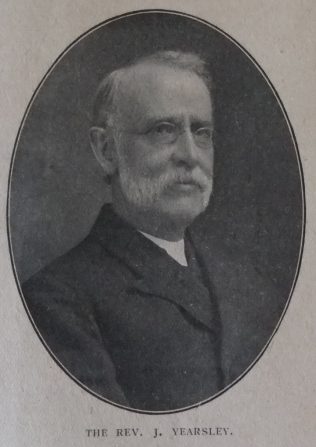 Joseph was born in 1849 at Witton, Cheshire to parents William Yearsley and Ann Barton. William was a boiler-maker. After the death of his mother, when he was eleven, Joseph was cared for by his grandmother, who was a Primitive Methodist, and strongly influenced his youth.

Joseph was converted at the age of thirteen under the ministry of Rev Ambrose Kirkland. After an apprenticeship in the building trade as a joiner, Joseph was called to ministry and entered Sunderland Institute in 1870.

Joseph’s fervour and devotion made at once a deep impression when he was travelling on the Chester circuit. In the village of Ellesmere Port he would at times preach his way through the streets,. On one occasion a rough bargeman pushed his way through the crowd and insisted on kissing the preacher – the man who had been such a blessing to his soul.

Joseph has a conversational style of preaching that was all his own, as were the construction and delivery of his platform addresses, the touches of quaintness and the flashes of originality always wakened attention, whilst his bright humour and homely phrases quickly placed him en rapport with his audience. At times his soul would flame forth in spiritual passion, and the people caught the glow.

Joseph was Secretary of Conference in 1906.

Following his superannuation, Joseph undertook duties at Edenfield, Bury Circuit. He spent the whole of his ministry of forty-eight years within the borders of the Manchester District.

The coloured evangelist, or, a sketch of the life and work of Samuel J. C. Edwards, of West Indies , 1884

Joseph married Sarah Antliff (1845-1929) in the summer of 1874 at Sunderland, Co Durham. She was the daughter of William Antliff. Census returns identify five of six children.