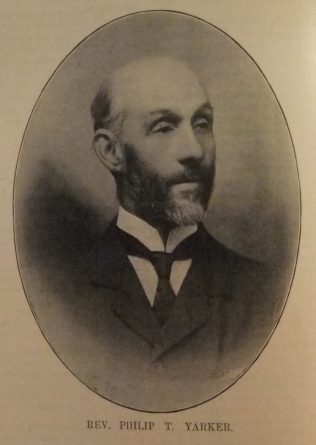 Phillip was born in 1847 at York, Yorkshire to parents Matthew Yarker and Mary Thornton. Matthew worked as a plumber and glazier.

Philip was converted under the ministry of Rev John Milner. He received his note to preach from Rev Thomas Newell in June 1867. Before entering circuit ministry, Phillip spent a year at the Sunderland Theological Institute.

During his ministry, Phillip superintended the erection of six chapels and four schoolrooms.

As a preacher and platform speaker, Phillip was above the average. He had a thoughtful and cultured style; and though his delivery was quiet, it was usually impressive. He could always be relied upon to say something worth hearing.

His obituary records that he laboured on wide and difficult circuits, and won the affection of the people by his gentlemanly bearing and transparent, saintly sincerity.

After superannuation, Phillip settled for some time at Evesham. The last five years of his life were spent at Englefield, Surrey.