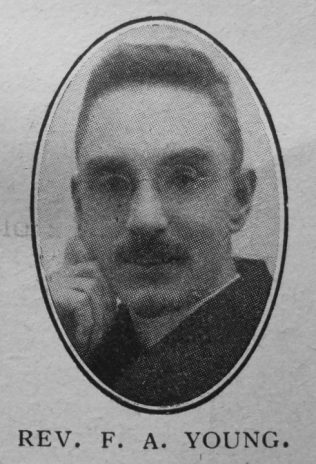 Transcription of obituary published in the Primitive Methodist Magazine by J.A. Smith

The death of the Rev. Frederick A. Young, on May 22nd, 1925, at the early age of forty-nine, removes from our midst one of the most gracious personalities Primitive Methodism has known.

To know him, was to love him; to learn how he strove to equip himself for his work, and, in after years, to lift above despondency an unconquerable soul in an unequal fight with ill-health, is to admire him beyond measure.

Mr, Young was born at Fenny Stratford, Bucks., on August 25th, 1875. His name was placed on the class book in infancy, and, as a boy, he was taken to class by his father, Seba Young. Here min an environment of home and church sweetly Christian, are to be found the roots of the noble character loved by so many in after years.

At the age of twenty, he removed to Bexhill-on-Sea, where he rendered fine service to our Church, eventually coming on the plan with the Rev. Thomas Collins. To the Revs. T. Collins and J. Biggs, Mr. Young was greatly indebted, not only for the inspiration of their friendship, but also for the invaluable guidance given in preparing for the ministry.

Mr. Young entered the ministry in 1901, spending probation at Caistor, Lincs. Then followed years of strenuous fruitful service on the following circuits: Pickering, Burton III., Brough and Goole. The demand of some of these circuits on his physical strength was tremendous, and was probably the cause of his early breakdown in health. The last ten months of Mr. Young’s ministry were spent on Liverpool II. Here he was happy in the love and confidence of a people who quickly recognised the nobility of the pure, consecrated soul that was in their midst.

Mr, Young was ever a keen student. He revelled in the poets and the essayists. Newman, Emerson, Rutherford and Dr. A. Whyt were his favourite authors. He made no mean progress in several languages. His mind worked quickly and logically. But beyond all else he had a consuming love of good English, and, as if by nature, a marked capacity in the appreciation. and creation of graceful phraseology.

While at Burton, Mr. Young married Miss Margaret Lundy, L.L.A., a cultured Irish lady. The ceremony took place on Dec. 30th, 1909, in the historic Presbyterian Church of Killinchy, Ireland. The union proved to be ideal in every way, for, not only was each perfectly happy in the other, but the wife was for the husband both a guide and an inspiration to new lines of study and a wider knowledge.

Mr. Young was not only a student. He was, as few can hope to be, an ideal pastor. When he entered a home it became a sanctuary radiant with light, his very presence bringing a sense of joy and peace. Young people who crept away from ministers, knowing that Mr. Young was in the home, would seek the charm of his company. There must be a host of friends, who, when recalling their unforgetable hours—the hours which, rise above and illumine all the years—gratefully whisper the name of Frederick Young.

In Mr. Young’s case it followed that because he was a student and a pastor he was also a preacher. There was nothing flashy or startling about his pulpit work. His preaching was deep calling unto deep, a vision from soul to soul. People with urgent needs—people fretted by business, overwhelmed by tragedy, wounded or defeated in the fight eagerly sought his church, finding under his ministry a grace which made all things new.

The work he did in the home and in the pulpit was but the natural effect of what he was in himself. Though quiet and retiring he was nevertheless of unflinching moral courage when great issues were at stake. In spite of repeated operations he refused to be daunted or to recognise defeat. He was utterly unselfish, yet, though self-less, his personality, by its silent force was a positive challenge to a fuller and a worthier life. And he has passed hence at forty-nine. But like his Lord, who was the centre of his life, he still lives on and is active in the world. He has bequeathed to all who knew him a memory, which, whenever recalled, must be felt as an urge to a greater devotion and a more Christ-like spirit.

The interment took place at Liverpool, on May 26th, 1925, in the beautiful Anfield Cemetery. The service was conducted in Boundary Street Church by the Rev. H.J. Taylor, all the Mersey side ministers taking part, and a choice tribute was given by Mr. James Mason, of Kirkby Stephen.

Frederick was born on 25 August 1875 at Fenny Stratford, Buckinghamshire, to parents Stephen, a bookmaker (1881), and Amelia.

Frederick died on 22 May 1925 at Liverpool, Lancashire.