You are here: HomenextPlacesnextBerkshirenextBradfield, Berkshire 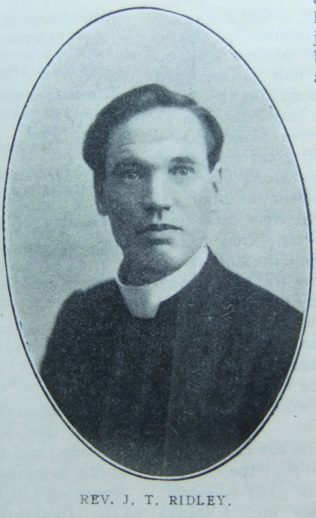 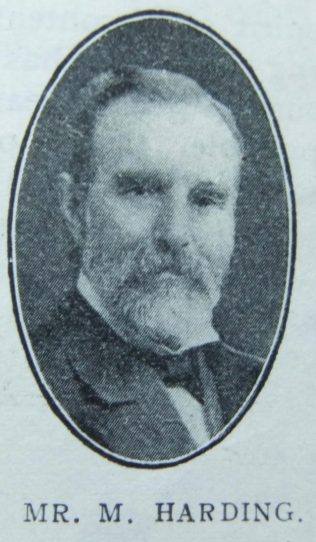 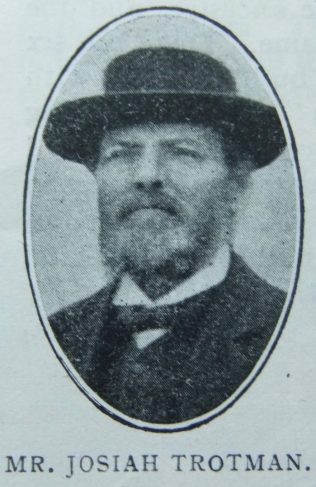 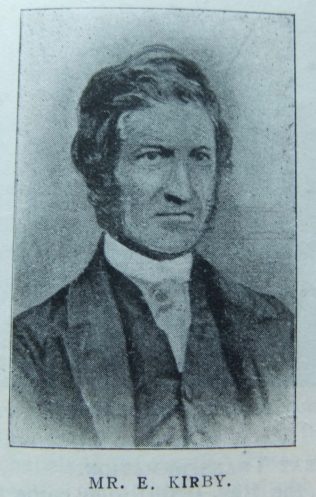 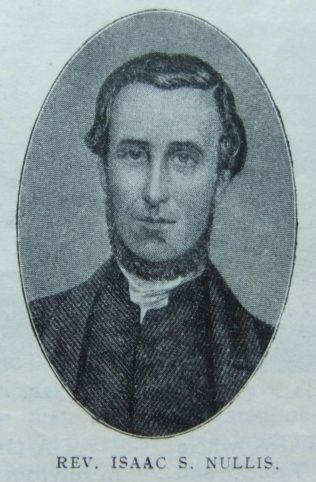 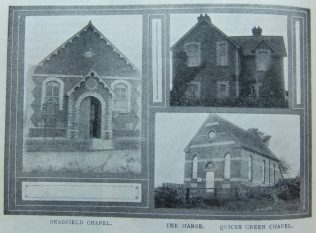 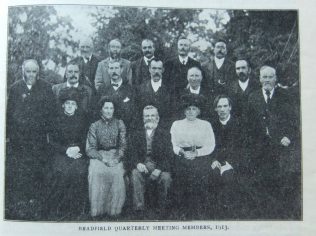 Transcription of Article in the Christian Messenger by H Ralph

Connexionally the Bradfield Circuit is contiguous to Reading on the East, Newbury on the West, Wallingford on the North, and Silchester on the South. It is purely a rural Circuit, and its six churches are to be found in that delightful wedge of upland thrust between the valleys of the Thames and Kennet.

In its early days Primitive Methodism had a stubborn struggle to obtain foothold in Berkshire. The climax being the savage sentence of three months imprisonment with hard labour of the Rev. Thomas Russell. The successful agitation for the remission of this barbarous decision, gave to the pioneers a reputation it is now difficult to estimate, and proved to be a powerful factor in their favour. The villages were seething with discontent; agitation of a violent character was rampant; rick burning and machine smashing were common offences; repression laid heavy hands upon minor misdeeds and capital punishment was the swift minister of justice. Was it, therefore any wonder that, when the people saw these field preachers “down the Squire,” it gave them great estimation in the popular regard. In this year – 1830 – great expansions occurred in Berkshire.

Edward Kirby, of Bradfield, prevailed on the Shefford Circuit to extend eastward, and the Rev. T. Russell came to open up the district, and soon they were all on fire for the Kingdom. A great fight had to be waged against bigotry, prejudice, and evil. Many a poor farm hand found himself dismissed from employment, and evicted from his home, for no greater offence than that of speaking to a preacher or attending a wayside service. A great Camp Meeting was, however, held on Bucklebury Common which gave flood-tide power to the advancing hosts. John Ride was a master strategist, and for five years unremitting attention was paid to the building up of vigorous societies throughout the district, so that when – in 1835 – the Reading mission was projected, Bradfield became the base and stronghold of the advance.

In a few years the Reading Circuit—of which Bradfield was an important section—became a most extensive and successful enterprise. The consecrated zeal and energy necessary for so great an achievement was due in no small degree to the burning enthusiasm, sturdy faith and mighty power in prayer of the plain men and women of these uplands. By no means dowered with this world’s gifts or gear, they were unsurpassed in the gifts of the Spirit.

I copy from my notebooks extracts from journals and letters of these stalwarts which speak volumes as to the secret of their success, all refer to wayside or cottage meetings. “Met at 5 a.m. in a clump of firs for prayer.” “God came down in the house and set about sixteen at liberty. Some ran out lest they should be converted.” “O, Jesus, save souls, this is what I want, I cannot live without this.” Who have heard these “ praying men” – as they contemptuously called – and cannot forget the mighty influence; the moving. melting, glorifying unction which pervaded the place while they interceded at the mercy seat? What outstanding men and women, were these both in character and ability, how fragrant are their memories still. Adam Clements – Reading’s first Circuit Steward – Edward Kirby,  Isaac Nullis,  George Warman, Isaac Bushell, Richard Turner, James Holmes, Mary Boraston (Mrs.Coling) in whose father’s house Hugh Bourne preached when visiting in the district, Nanny Street, of great renown, and a multitude of noble men and saintly women whose names and faces crowd the mirrors of one’s mind. Of a later period were the Revs. George Smith, Isaac S. Nullis, and still later the Rev. James Prouten.

At one of the parish churches in the far-off days of which I write, the clerk informed the rector on his arrival, “Please, sit, there be on’y one congregation in the church and he’s a she.” Such apathy as this was not displayed by the converts of those early days. Morning, noon, and night, these men and women could be heard praising God and constantly ejaculating prayers as they pursued their duties or met each other in their toil. Then at evening when tasks were done some sheltered wood, or at the cross-roads, or in some cottage, or at some lone farm, you would find these diligent seekers of hidden treasure searching for souls. Neither persecution, violence nor threats could damp their ardour, and if God only gave them souls, they were happy beyond compare. If only the walls of many a thatched cottage, or the consecrated living room of dear old Nanny, could be made into “records” and repeat the pleadings there, with and for sinners, it would be a revelation to modern days of the mighty power in prayer of these giants of yore. In 1849-51 a great revival swept the whole district and people came long distances to catch the flame, and the centre of it all was Nanny’s humble room, and the light from that flame has not yet been extinguished, and this is the reason why: while Bradfield is the head and centre of the Circuit Quick’s Green has been the heart, and the Mecca to which the pilgrims turn their footsteps.

In 1877 Bradfield became a Branch of the Reading Circuit with the Rev. T. Reeve as its first minister. During the ministry of the Rev. E. Millichamp, 1889-93, the branch enjoyed great prosperity, and during this period the Manse at Bradfield was erected, and this paved the way for complete independence in 1895.

The Circuit owed much to its first Stewards, the late Mr. J. Trotman and Mr. J. Harding, both of whom performed yeoman service for the cause. The present steward, Mr. T. Street, is of noble ancestry, and the bearer of an honoured name. There are six chapels, viz., Bradfield, built in 1879, with adjacent Manse (1893) and a burying ground in close proximity. The chapel, as I write, is undergoing renovation, and a porch is to be added which will make it a commodious and comfortable building. Beenham, re-built in 1862, where Mr. and Mrs. Layley greatly assisted the cause. Quick’s Green, rebuilt in 1876. Theale, built in 1868, where still resides the veteran, John Fisher, and where Mr. John Harding and Mr. G.H. Kidd worshipped and did valiant service. Burnt Hill, built 1866; and Yattendon, erected and presented to the Connexion by the late Mr. E, Bew, of fragrant memory – 1877. There is an old Berkshire saying, “It is no mortal use to whitewash a black cow,” and I cannot, but in faithfulness, record in later years, a great declension of the Circuit from its former days of high achievement. Nor can anyone, who knows the circumstances of country life during recent years, be in the least surprised. The continuous movement of the youths to the towns, the drift of the people to great centres of industry, the tide of emigration and the spirit of discontent and unrest with prevailing conditions, has made the work in Circuits such as this disheartening and well-nigh impossible. Once prosperous and vigorous societies dwindled down to the feeblest possible state. In 1911 the Circuit membership had fallen to 131 and an income of £24, and it also received a grant of £10 and was in exceedingly low water.

In July, 1911, the Rev. J.T. Ridley came to Bradfield under these distressing circumstances. During the winter of 1911-12 each place, save one, was taken in turn by him for a fortnight’s mission, and during that winter it is but a plain fact to say the societies were re-born, and as a twice-born man becomes a new creature so the Circuit became a new – a transformed creation. The mighty traditions of the past are reincarnated in this rural Circuit, and miracles of grace and deeds of heroic daring are being enacted to-day every  whit as wonderful as those of the great days of the past. Remember the conditions and compare the corresponding quarter of 1913 with that above. Members 231, increase 100, income £36, and grant given up. Trust debts repaid: Bradfield £20, Beenham £30 (30 years owing), Yattendon £20. Raised for renovation of the Manse: Yattendon, Burnt Hill, Quick’s Green, Theale, £123, and at Burnt Hill a suitable organ has been provided – the first – and the cost raised; these chapels will now favourably compare with the best village chapels in the South. These are the practical results of a great spiritual awakening of which others outside our own church are conscious and feel the glow. Bradfield has now a great renovation scheme on foot, and already the financial results are gratifying. Mr. T. West, Mr. A. Johnson, and a noble band of men and women, are indefatigable in these matters. The story of Yattendon is indeed a sample of the whole and must suffice. Its membership had sunk to one – an old lady – its congregation to two or three. Dilapidated and in debt, it was proposed to seek powers to sell (1911). Now there is a live society of 24 members, debts paid, chapel renovated, and congregations and services of the most inspiring character. The story of revival is only half told, the good work is proceeding apace, and the best is yet to be.