You are here: HomenextPlacesnextBerkshirenextReading and local Primitive Methodism 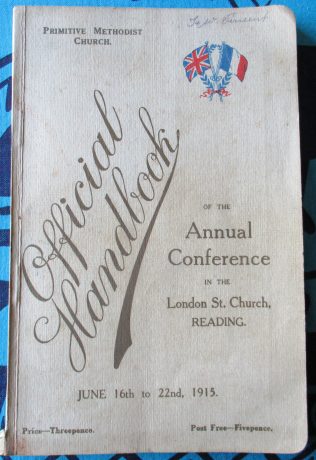 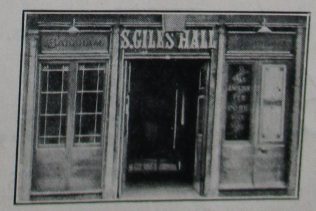 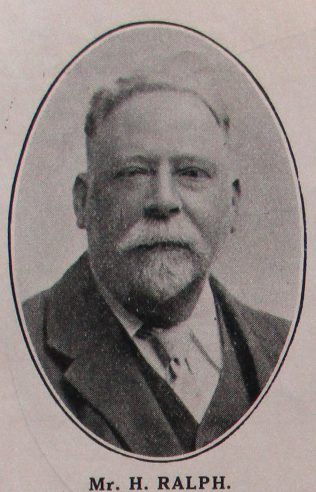 The town in which the Conference meets in the critical year of 1915 may by many be considered to be a modern residential town.  While it is essentially modern, it has a history which reaches back over a thousand years.

The Danes rowed their ships up the Thames to the Kennet, and made Reading the base of their operations in Wessex.  Parliament has frequently legislated here.  During the reign of Charles I, and later when the troops of James II were defeated by the Prince of Orange, Reading felt the shock of arms.

The town has today – as in the past – a distinct and by no means insignificant place in the commercial life of the nation.  The ‘Gild Merchants of Reading’ had a long and notable history, receiving many charters and, although the manufacture of silk and cloth is no longer carried on here,  Sutton’s Seeds and Huntley and Palmers’ Reading Biscuits are known wheresoever civilization has penetrated; and there are countries where kings and queens of dusky subjects find material for personal adornment in the biscuit boxes made at Reading.

The foundations of the Benedictine Abbey of Reading were laid in 1121 and the main buildings look upwards of forty years to complete; it was consecrated by the famous Archbishop Becket with great pomp and circumstance.

The Brethren of St. Francis of Assisi also established an Order here about 1233; the Church of the Order while much smaller than that of the Abbey, was one of considerable beauty.  The three ancient parishes of Reading, viz.: St. Mary’s, St. Lawrence’s, and St. Giles’ have churches, portions of which have great antiquarian and historical interest.

Nonconformity in Reading may be said to have taken definite shape in the great days of the Puritans and at least three bodies have an unbroken history leading back to those stirring and epoch-making days, viz: The Independents, The Baptists and the Society of Friends.  Methodism in Reading was a plant of tardy growth and its early days were fitful and uncertain.  John Wesley not infrequently visited Reading, but he does not speak in flattering terms of his reception, or of the effect of his efforts here.  On the other hand, it is strange to tell, that Primitive Methodism “caught on” quickly and not withstanding many discouraging circumstances, soon established itself as one of the religious forces in the life of the town.  It was in the days when the whole countryside was seething in revolt that our great Pioneers entered South Berkshire and seven years later the County town of Reading.  On that early Sabbath morning Reading was startled by the novelty of the entry of a large number of country people, who sang through the streets and the held services on the Forbury Hill.  When the first shock of excitement had passed, the people flocked to the services and many and great were the triumphs of the Cross in those early days.  The men who established Primitibe Methodism in Reading had one standard and one only, by which they measured their successes.  If they had conversions, they were happy beyond

compare, but if these were lacking, whatever else prospered, they were of all men the most downcast and miserable.  Happily the converting work prospered abundantly, practically every church in the town admitted its indebtedness to the coming of these zealous men, and all honour to them, both clergy and ministers were not slow to give their sympathy and help to the infant cause in many ways.  In October 1835, a building in London Street known today as St Giles’ Hall, was taken on rental and here a good society  was established.  The progress can probably best be told in the figures of the successive yearly reports.

In 1839 Salem chapel was purchased.  The opening services were held on October 6th 1839, presided over by Mr T.Baker – an influential member of the Broad Street church – who not only gave £90 at the opening services, but soon after built a schoolroom, with preachers’ rooms under, at his own expense.  He was also a most liberal subscriber to the cost of the extensive missions attached to the Circuit.  The work in London Street had been hampered by restrictions which our Fathers strongly resented, but now five o’clock morning services and prayer meetings became the order and the work proceeded gloriously.  It was at “Old Salem” that the Conference of 1841 met – the first Primitive Methodist Conference to be held in the south of England.  Of the proceedings of that assembly, not much is known.  Locally it was overshadowed by the death of Mr Baker, but there is very little doubt that one or two very far reaching proposals took definite form at that Conference.  Perhaps not the least significant fact was that the Conference should have come south and been held at Reading which had only been missioned six years before.  The public religious services were a great success.  Hugh Bourne [reached the opening sermon at 5 a.m. and William Clowes preached in St. Mary’s Butts in the evening with extraordinary fervour and unction; this service was one of great power and remained for years the especial delight of the “sermon tasters” of the day.  There can be no doubt that the influence of the Conference was long felt, both in the town and the circuit.

In 1866 Salem was sold and the parent society returned to London Street to its present church.  To the men, who with superb faith and confidence, carried through this great project so successfully, Primitive Methodism owes a great debt.  For many years the parent society and the circuit generally had remained stationary, but with the impetus and faith engendered by this effort, Cumberland Road and Friar Street churches were quickly established and good societies formed, while the parent church itself continued to increase, both in members and in influence in the town.

It was at London Street that the Conference of 1886 met during the ministry here of the Rev. G.E. Butt.  The President on that occasion was the Rev. Ralph Fenwick and the Secretary was that grand old stalwart of the church, the Rev. Jas. Travis.  Again history repeated itself.  The mighty services and the inspiring public gatherings were the outstanding features fo the Conference.  How very many had their narrow visions enlarged, their faith strengthened and their godly purposes established by the potent influences which had full play in those truly wonderful meetings.  Reading circuit has six country and five town churches.  In addition to the three already mentioned, there are Wokingham Road, at the eastern end of the town and Oxford Road at the western and all are easily accessible by train.

Under circumstances unparalleled in the history of our nation, the venue of the Conference had been changed from Grimsby – a stronghold of Primitive Methodism – to Reading.  Grimsby’s Primitive Methodism is unrivalled for the warmth of its worship and the generous hospitality of its homes.  With much more meagre resources, and with much less time for the preparation for the Conference gatherings than is usually afforded, Reading will bid its guests a warm and cheery welcome.  We will receive you into our town, our churches and our homes, praying that your brief stay with us may be graciously blessed to both hosts and guests, and that the spiritual results of the gathering may have far reaching effects in the upbuilding and expansion of our beloved Zion.