You are here: HomenextPlacesnextBuckinghamshirenextAylesbury: An 1842 account of chapels in the Aylesbury circuit

Aylesbury: An 1842 account of chapels in the Aylesbury circuit 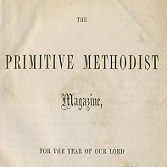 The Primitive Methodist Magazine for 1842 contains an account by Samuel Turner of chapels in the Aylesbury circuit. The full account is in the attached document, transcribed by David Tonks. It includes accounts of Aylesbury, Stewkley, Aston Abbotts, North Ma(r)ston, Luton, Wing, Padbury, Whitchurch and Wingrave chapels, and the following information about the new Aylesbury circuit.

“In reviewing the manner in which Divine Providence has so signally interfered in our behalf, during the last four years, we see much cause for devout thankfulness to the Author of all Good.

About this time, Buckingham branch, then a mission of Congleton circuit, was on the point of a wreck. Embarrassed as we were, we ventured to take it up. God approved of our motives,and smiled on our work of faith and labour of love. A revival of religion started, and spread through the circuit, and near one hundred were converted to God.

Our income at the next quarter-day, which was held March 16, 1840, was thirty-seven pounds fifteen shillings and eight-pence. The outgo was thirty-seven pounds eleven shillings and seven-pence halfpenny. Thus at the first quarter-day after its separation, the circuit met its demands, and honourably paid the married preacher his full salary; a privilege he had not enjoyed during its union with the Shefford circuit; but one which he has since enjoyed up to the present time. I have laboured in this branch and circuit four years. And the increase during the four years is four hundred and thirty-five.

We have ten chapels, not one of which was occupied by our people when I entered it. We have also opened a promising mission at Newport Pagnell. Our poor people have nobly stood by the preachers. Their self-denial, their Christian charity, the individual and collective interest they have taken in the converting work, is worthy of public notice. May God bless them with increasing zeal for the glory of his name, and the extension of his kingdom. I have had several excellent colleagues stationed with me in this circuit, whose praise is in all the churches. The local preachers have laboured nobly in the revival, and the doctrine of present salvation is better under-stood-by them than formerly. That this knowledge may increase, is the sincere prayer of your affectionate Brother in Christ,