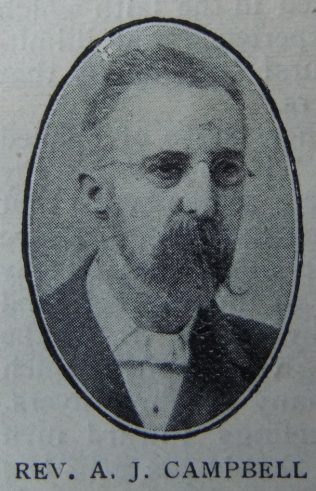 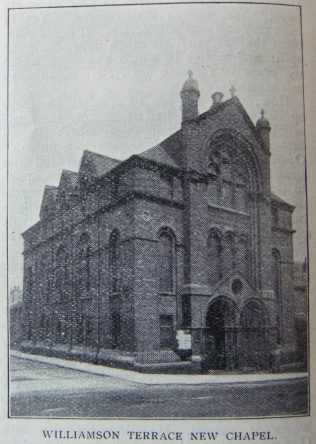 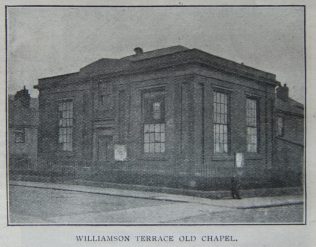 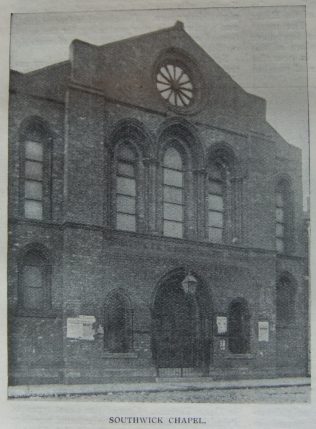 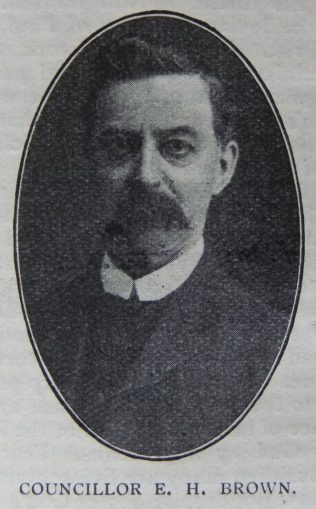 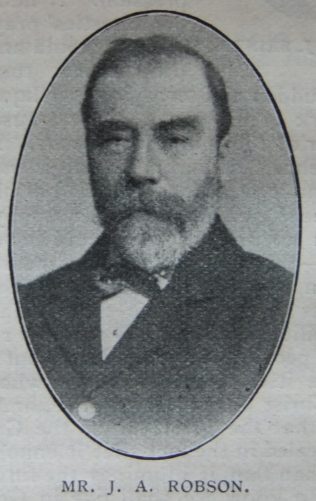 Transcription of article in the Christian Messenger by Rev. Alfred J. Campbell, F.L.S.

On examining a map of the County of Durham, on of the notable features is the important river Wear which flows into the North Sea at Sunderland.

Primitive Methodism lines the banks of that famous river from its inconspicuous source at Wearhead to its world-renowned mouth at Sunderland.

The river passes respectively through the Westgate, Bishop Auckland, Durham and Chester-le-Street Circuits, before it reaches its home at Sunderland. Weardale itself has supplied Primitive Methodism with some of the most loyal, intellectual, capable leaders of our Church life; and right on along the tortuous course of that River Wear intellectual and spiritual tributaries have been added to the great river of our Church’s life.

The preachers have come from the country, the towns have supplied, in immense quantities, the material on which to work. Very early in our Connexional history Sunderland began to figure most conspicuously. The robust, ardent life of the North-East Coast town suited the peculiar genius or temperament of Primitive Methodism. It came to stay, or rather to go, for it has been going since 1822 in this strangely complex, but fascinating town. The town itself very early in our history gave a name to a district, the largest and most influential in the Connexion, geographically covering a vast area from Berwick to Whitby and from Whitehaven to Sunderland; before it was divided it was the most important district in Primitive Methodism, and even now, though restricted in area, I am not so sure but it still holds premier place in many of the essentials that go to make up a powerful, effective district.

Our history in the town of Sunderland has been strangely chequered. The foremost ministers of our Church have done some of their best work here. For years the old Sunderland Institute was a centre of creative energy, and the men who are the makers of our history to-day look back on it as their Alma Mater. Apart altogether from the Sunderland Institute, the Circuits have been enriched with the ministry of men like John and Thomas Nelson (the pioneers of Primitive Methodism in the town), Jeremiah Gilbert, Benjamin West, Ralph Fenwick, Thomas Guttery, John Atkinson, John Hallam, William Graham, H.B. Kendall, and many others of our ministers of illustrious name – preachers, teachers, administrators, legislators.

The genesis of Primitive Methodism on the Monkwearmouth, or north side of the River Wear, is specially interesting. The usual room in a back street near the ferry-boat landing was the first meeting place of the pioneers of our Church of what is now the Sunderland Third Circuit. The real passion for men was in the hearts of these early workers. Expansion followed and a larger room was rented on Lookout Hill, and these men of God looked for souls as the bronzed sailors looked through the storm for the ship that was making for home as best it could through the troubled sea. Growth was still the fact, and expansion still the need. The next step was out of a rented room into a real chapel, with real pews in it, and a real pulpit, and a real penitents’ form, with plenty of room for the home-coming wanderers, and real, fervent worshippers in the pews, and real ardent preachers of the “old, old story” in the pulpit. This chapel was built in Williamson Terrace, not far from the old rented room, in the year 1840, and for years it was the centre of spiritual powers, the gathering place for spiritual forces, that did more for the shipyard workers in neutralizing the fascinations of the public houses of the neighbourhood than any legislation ever passed in a British parliament. It was no uncommon thing for a mission band of 120 men and women to hold an open-air service near the ferry-boat landing on a Sunday night, year in, and year out. These were days of holy zeal, and passionate yearning for the lost. The converts in this first chapel were so many that by a simple, natural process, another place was needed to accommodate the growing congregations, and find scope for the expanding energies of the early Church. The keen-sighted officials said we must distribute our forces; a site was secured and the famous Hodgson’s Buildings Chapel was erected some half a mile from the first chapel.

It would require not a page but a book to chronicle all the deeds of the renowned Hodgson’s Building Society. After a few years, as development still continued, The Pilgrim Street Chapel was built right in the heart of the population of miner’s working at Pemberton’s Pit, as it was then known. Pilgrim street is to-day one of our most thriving societies, with a splendidly-organized Sunday school, under the able, tactful superintendence of John Soppit, who has held that position for well-nigh thirty years. The chapel is free of debt, and a scheme is now maturing for the erection of a more commodious place of worship on the same site.

Southwick, which is really the western extremity of Sunderland, was invaded by the glorious pilgrims, who poured such energy into the work there that after a brief occupancy of a small chapel, the present chapel in Clockwell Street was built in 1860 and is to-day free of debt, as is also the schoolroom in Dene Terrace. One of the finest types of Primitive Methodist life is to be found worshipping and working in our Southwick Chapel. Some of the princes of our Israel have been associated with our cause at Southwick. Our oldest local preacher, J.P. Tiplady, once a minister in our Church, was an active worker here, and has recently gone to his eternal rest.

At Castletown, one-and-a-half mile further up the River Wear, our people worshipped for years in what was but a colliery smithy, and in rainy weather miniature waterfalls ran through the tiles while the service proceeded and had to be dodged by the ingenuity of the worshippers.

Three years ago a school-chapel was erected in the place of the old smithy. This is our Circuit’s financial problem. Castletown is a colliery village with a migratory population, but there are a few loyal, hardworking primitive Methodists who have set their face to the difficult task of reducing their £1,000 debt.

In 1890 the old Hodgson’s Buildings Chapel was required by the North Eastern Railway Company for extension purposes; the trustees secured £800 for their place, and with that as a nucleus a new chapel was erected at Newcastle Road; the chapel is an imposing structure, and has ample accommodation for the worshippers in the immediate neighbourhood.

Coming back for a moment to the old Williamson Terrace Chapel – after serving its purpose the trustees decided in 1881 to build a new chapel on the old site and a property was erected at a cost of £3,000 – £1,000 of which remains as debt. The chapel is one of the most commodious and comfortable places of worship in Monkwearmouth, with ample school accommodation on the top of the chapel, with separate class rooms off the central school, a young men’s reading room, a lecture room, young women’s room, kitchen, and other rooms for the use of this important society. There has passed through this Williamson Terrace School hundreds of young men and women, many of whom are with us to-day in active work, and out of it have gone to all parts of the globe others who carry with them fragrant memories of their association with the Williamson Terrace School. Our present Circuit Steward, Mr. J.A. Robson, has for many years been associated with the Williamson Terrace Church; he has given a son to our ministry, who is to-day travelling at Silsden. As a Circuit Steward Mr. Robson has fulfilled the duties of that important office with diligence and painstaking care, he has been a generous supporter of our Church and of all its manifold institutions, and no more loyal Primitive Methodist is to be found in the whole of our Church.

Our junior Circuit Steward, Councillor E.H. Brown, has all his life been a faithful and honoured worker in the Williamson Terrace Society, and is to-day a local preacher, superintendent of the school, treasurer of the trust, and a man esteemed and highly honoured in the civic life of the town and has represented Monkwearmouth Shore Ward for five years on the Town Council; he belongs to a family of Primitive Methodists stretching back to the beginnings of our Church life in Sunderland; his mother (an old lady of eighty-five years) is one our most regular worshippers at the “`Sabbath evening service; his sister is the wife of Rev. J.A. Cheeseman, and four of his nephews are in the active work of our ministry to-day.

The secretary of our Williamson Terrace Trust, Mr. J Butterfield, is one of the best minute secretaries I have ever met; he is a devoted worker in the Band of Hope, and holds the position of secretary to our Circuit Sunday School Union; he married the eldest daughter of Mr. John Wilson, M.P. for Mid. Durham, and has unique opportunities for coming into touch with the life of the town, inasmuch as he is organizing secretary to the Sunderland Liberal Association.

Up to six years ago we were part of the Sunderland First Circuit, but in the year 1901 Conference sanctioned the application for the division of the Circuit, and we in that year became Sunderland Third Circuit, Sunderland Second having the renowned Tatham Street as its centre, Sunderland Fourth Mainsforth Terrace, while Sunderland First has Cleveland Road as its head.

“One word more.” Thirteen years ago a mission was started at Bright Street, which lies towards Roker; it was worked at its inception by Mr. James Gibbon and Mr. E.H. Brown from the Williamson Terrace Society.

It is to-day a flourishing mission and is largely guided by the wise and prudent direction of Mr. Charles Peacock, one of our best local preachers, and certainly one of the most unwearied and attentive workers in our Bright Street Mission, with a fine, genial personality, which has won the sympathy and service of a number of workers, both old and young; and for a bit of real mission work of the olden type, Bright Street, with Charles Peacock leading, would be difficult to surpass.

“One other word more,” and I have done: our work here is only beginning. Four of the six places on our station have this winter held missions conducted by Native Agents (our own local preachers) with conspicuous success:-

Thomas Campbell – the ubiquitous, ardent, forceful, convincing preacher of the Word, is in the shipyard by day and pleading with the sinners in the chapel at night.

William Foster, with his passion for souls, cheerfully hews his coal in the coal mine and then goes off to dig out somebody for God.

John W. Stores – a tradesman at the counter by day, finds his chief delight at night in pleading in his own energetic, pointed, telling way with sinners to “buy the truth.”

E.H. Brown and C Peacock, of whom I have just written, make up the band of Native Agents who have done splendid mission work on this station during the winter.

I daresay, like most other Circuits, we have our financial difficulties in the shape of chapel debts, but for compactness of area, for the number of willing workers, and for the enlarging groups of generous kindly hearts, Sunderland Third Circuit stands high in the splendid succession of “true-hearted. Whole-hearted Christians, who are neither ashamed of their ancestry as Primitive Methodists, nor as Christians.

Obituary in the Primitive Methodist Magazine 1907/746