You are here: HomenextPlacesnextDerbyshirenextBolsover: Primitive Methodism in Bolsover, Derbyshire 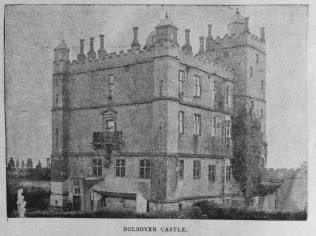 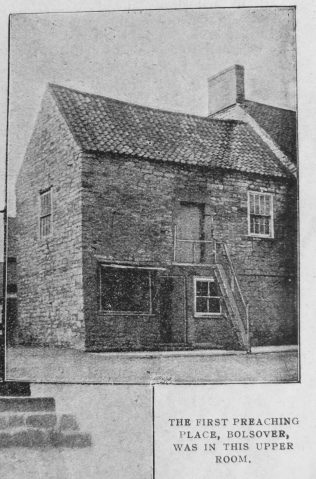 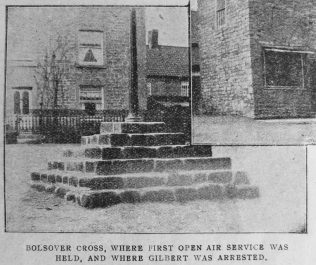 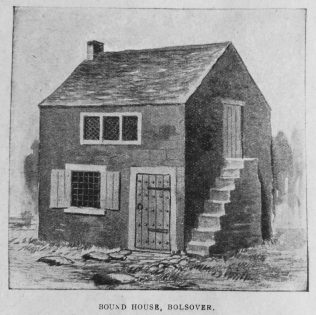 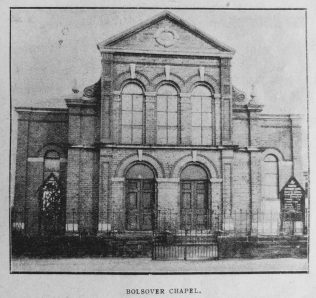 Transcription of Article in the Christian Messenger by Rev. W.T. Cole

BOLSOVER has an assured place in the history of Primitive Methodism from its connection with the pioneer labours of Rev. Jeremiah Gilbert. It was the scene of an incident that both our recognised historians have recorded, as illustrating the conditions under which our fathers laboured.

To-day it is a busy and prosperous mining centre; populous villages have sprung up around it, and the whole district palpitates with life. A little while ago a civil servant, whose duties take him all over the country, came to our town for the first time. He thought its name was familiar, yet he could not recall any reason for the familiarity. “Bolsover, Bolsover,” he said; “I seem to know the name well enough.” Still he failed to find the reason. We suggested that perhaps it was because he had often seen it on the coal waggons on the railways as he had travelled up and down. “That is the reason,” he replied, “yes, that is it.” On the other side stands another story. A popular Lancashire M.P. visited our church to preach Chapel Anniversary sermons. He told us that when some of his friends were informed that he was coming to Bolsover, they said: “Bolsover, where’s that‘? Does it hing on t’ map or off?”

We are on the map, sure enough, about five miles East of Chesterfield, and not without importance. For one thing, we boast a castle, whose foundation goes back to Norman times, and, though to-day, with the exception of “The Keep,” it is a picturesque ruin, kings have transacted business in it, and startling echoes of tumultuous times in our national history have sounded about its walls. For another thing, Bolsover parish, with its population of between eleven and twelve thousand souls, is said to be the largest ecclesiastical parish in the country. And, again, it is the head of a prosperous Primitive Methodist Circuit, and has a recognised place in our official history.

When Rev. Jeremiah Gilbert first preached in the town, it was in a very different condition from that which it enjoys to-day. Its population was, perhaps, a tenth of the present. The inhabitants were devoted almost exclusively to agricultural pursuits. Though for many years a market had been held here on Fridays, it had already been discontinued. No mines then found employment for the workers, no smoke rose from great tall chimneys, no railway engines, with slow, heavy, rumbling goods trains, broke the silence of day and night. It was a quiet country town. Nonconformity was represented by a little building of rubble-stone, in which the Congregationalists worshipped, and by cottage meetings conducted by the Wesleyans. The vicar lived in the Castle.

Jeremiah Gilbert, having been appointed to commence a mission in Shef?eld, left his home at Caunton in Nottinghamshire, and travelled on foot, via Mansfield and Bolsover. Leaving the former town with a few comrades on Sunday, May 18th, 1819, he arrived at Bolsover between 10 and 11 a.m. they were quickly informed that some of  brethren had been here the preceding Sunday when they had been “taken up” and cast into prison, and afterwards set before a magistrate. However, it was a fine morning, and Gilbert and his friends, nothing daunted, proceeded to hold a service. They borrowed a chair, sang and prayed, while a company of some hundreds gathered round. Then Gilbert announced his text: “Come thou and all thy house into the Ark.” When he had finished a great rough constable came up and asked him by what authority he stood there. “By the authority of the King of Heaven,” answered the preacher, and asked in turn by what authority he, the constable, was taking him into custody. The constable pulled a great key out of his pocket and said: “This is my authority.” Gilbert shouted: “Glory be to God,” and prayed aloud  for the man’s salvation. Four of the party were then marched off to the lock-up, locally known as the “Bound House,” one of a row of old houses overlooking the Churchyard. It had two rooms, one on the ground floor, used as a prison, and one above used as a dwelling. Its strong door was studded with nails, and in place of a window iron bars were placed vertically and horizontally, leaving plenty of room to pass things through to the prisoners. It was a cold, wet place, without fire or seat. The people of Bolsover were kinder to the Evangelists than were the authorities. They put money in at the window. At night they put candles in. They took them food. They even made them a fire and gave them a few old chairs. At 11 p.m. the incarcerated held a class meeting, in which a few Methodist sympathisers outside joined. At midnight they settled down as best they could to rest. Gilbert lay on two old chairs, and one of his companions lay on a board. He afterwards wrote: “When I was in Bolsover Bound House, where there was neither bed nor straw, God took possession of me, body, spirit, soul, only Him to possess the whole. I know I deserve neither bed nor straw at any time, but the Lord is good, and a stronghold in the day of trouble, and He knoweth them that trust in Him.”

Such a beginning did not promise well for Primitive Methodism in Bolsover; still a beginning having been made, it was followed up, and the cause has continued unto this day. Gilbert preached here many times after his initial effort, and was never again molested. For forty years the cause had a very feeble and struggling existence, holding its meetings in cottages and hired rooms, and not until nearly fifty years years after the pioneer service was the first chapel built.

The year 1859 witnessed a marked improvement in the fortunes of the little society. The services were transferred to a more commodious and better furnished meeting place – a loft over a stable in the Market Place, the property of one of the members. Its membership numbered twenty-four. The prospect was full of promise. Bolsover was promptly made the head of a “Branch” under Chesterfield, with eleven preaching places and two hundred and nine members, and a probationer,

Rev. H. Haynes, set in charge, with residence in the town. At the first Quarterly Meeting the total income amounted to £11 11s. 10½d., and the outgo £6 11s. 9d., the minister receiving as salary, £4. The “Branch” prospered so well that five years later it was able to maintain an approved list preacher, who successfully carried to completion the building of our first chapel in the town. It was a substantial stone edifice in a good situation in Cotton Street, providing accommodation for 230 persons, and costing £410. In 1869 the “Branch” became Bolsover “Circuit.”

Meanwhile, mining operations had begun at Staveley – a village about four miles away, in which was a society within the “Branch.” The rapid influx of miners gave an opportunity the little society eagerly exploited, with the result that a strong church quickly came into being, full of vigour and zeal. Bolsover was gradually eclipsed, and steadily declined, until in 1879, ten years after the formation of the Circuit, it yielded its place to its prosperous rival. At the same time the minister left Bolsover for Staveley, and the Circuit took the name of its new head. For a number of years afterwards Bolsover had a bare existence; the cause almost died. It was not until the opening of mines close to the town in the early ‘nineties, that it revived again.

The advent of the miners, many of whom had belonged to our church in other areas, quickly changed the whole situation. The class-book soon had a lengthening list of names; the Sunday School increased; the chapel rapidly filled; the sound of a multitude heartily singing was again heard in the sanctuary; earnest prayers made the place ring again; and soon the formerly deserted “Bethel” became a radiant centre of hot Evangelism. Neighbouring villages, called into existence by adjacent mines, were eagerly missioned. The Sheffield District Missionary Committee, seeing the opportunity for our church, took over the work in the district, under the name of “The Langwith and Doe Lea Valley Mission,” and sent Rev. H. Taylor to develop our interests in the locality. New societies were commenced, and in a few years school-chapels were built at Palterton, Shuttlewood and Doe Lea.

Then the fervent miners desired a new sanctuary at Bolsover. The “old stagers,” who had kept the cause together through the lean years, and others belonging to other communions in the town, could hardly understand their readiness to enter on so bold a venture, but nothing daunted them. A plot of land was leased at the Town End from the Duke of Portland, and in 1899 the present commodious premises were erected at a cost of £2,250, with sitting accommodation for 320, and school accommodation for 300 scholars, together with convenient vestries and class-rooms. Bolsover again became the head of a Circuit bearing its own name, alongside Staveley Circuit, which still covered the old ground. In 1902 a pipe organ was installed. Great prosperity was enjoyed, and the church quickly took the premier position in the town.

In celebration of the Centenary of the Rev. Jeremiah Gilbert’s visit, and of the introduction of Primitive Methodism into the district, the Synod of the Sheffield District was held at Bolsover in 1919 – the first time we have entertained it. Meetings of distinctive power were largely attended. To celebrate the Centenary further, the debt upon the premises was cleared, and the Duke of Portland kindly gave the freehold of the land.

How do we stand to-day, after the labours and vicissitudes of a hundred years? We have a church of 120 members; a Sunday School of 260 scholars; Junior and Senior C.E. Societies, the latter with over fifty members; the best Band of Hope for miles round; together with other institutions ministering to the social and religious life of our people. The church is full of life and effort. Our officials are among the leaders of the civic life of the Town, and our local preachers are in constant demand. The church stands at the head of a Circuit bearing its own name, and consisting of seven societies, loyal to the Connexion and generous to its institutions.

The story of the pioneer is often recalled; and with pride and humility is rejoicing made when reflecting on, “whereunto the work has grown.”